Duncan currently works with us at Scottish Documentary Institute having graduated from the Edinburgh College of Art. His graduate film Radio Silence  has travelled round a number of festivals and was nominated for a BAFTA Scotland New Talent award. His earlier film The Lady with the Lamp about his Mother was also shown at festivals before going on to receive over 300,000 views overnight when premiering online. He wrote about this for us in a previous post.

All of this put him in a great position to apply for Bridging the Gap, so how did he go about doing it?

After graduating from the Edinburgh College of Art, I was faced with going through what I’ve taken to calling the ‘post-graduation dip’. About 50% of my friends, if not more, left Edinburgh, and the world suddenly became a dramatically quieter place. I moved back home, became more single than I’d ever been in my life, and got through a lot of Netflix…

There’s a number of opportunities/paths available for a reasonably young aspiring filmmaker in Scotland, I targeted the only documentary specific one - Bridging the Gap. Think up an idea, write a proposal, get it submitted. That became my aim.

“What film proposal justifies 8k funding?” I thought to myself.

After my previous films being about my Mum and then my Dad, most people encouraged me to look for something less family orientated. So I decided to make a film about my Granddad. I drew up a plan, spoke to a few reliable contacts and bounced the idea about a bit before writing and redrafting my proposal a number of times and then submitting it. (A key thing that helped when writing the proposal was taking time away from the writing, and then returning with fresh eyes.)

So now I had to wait a week or so to find out what the verdict on my Granddad and I was going to be. Aside from one night in Fort William I hadn't really had a Summer holiday so I decided to take advantage of some cheap flights and go for a wee adventure.

I’d spent the day walking round one of the world’s most romantic cities when I got the news about being shortlisted. Never have I felt more daft than when walking some of the most spectacular streets in the world, completely alone. Why on Earth hadn’t I saved coming to Venice for a honeymoon, or something more traditional like that? I needed this commission. I also needed to pull myself together. 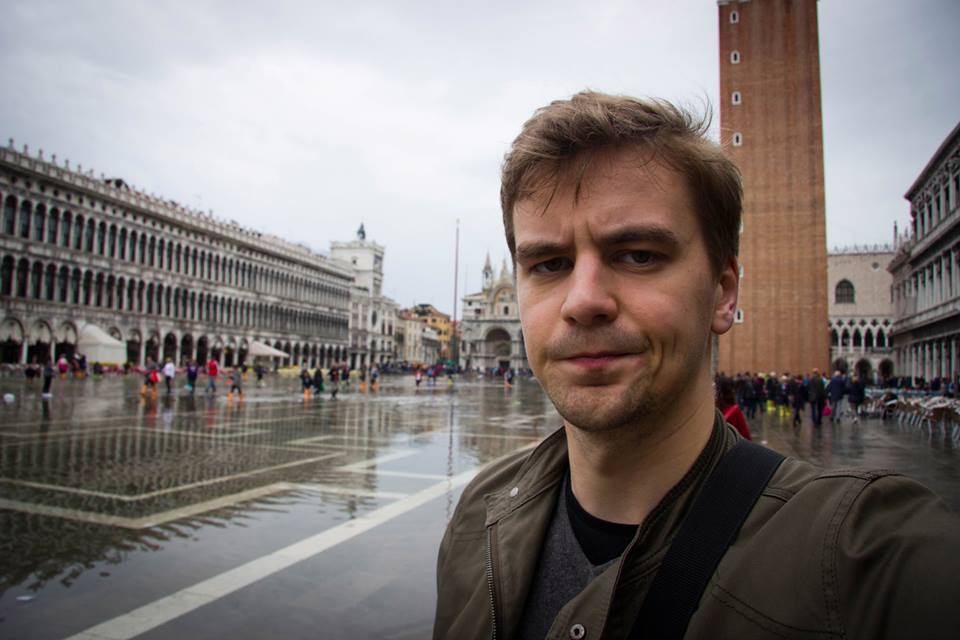 Getting the good news cleared my head.

The next step would be developing the film further to become one of the final four commissions.

Another big part of this whole process was convincing my family that despite studying film at an art college, there may be some financial light at the end of the tunnel. If I didn’t get the funding, how long before my Mum started talking about how good my job had been at Boots the Chemist again? Dear God, I couldn’t go back to selling meal deals, (or could I?).

So I attended the workshops (exceptional by the way), enjoyed the free lunch, developed the idea, filmed the beginning of the film, practiced my pitch over and over, edited my trailer, spoke about the film to as many people as I could, did all the things you’re meant to do when researching and making a film. Got myself as ready as I possibly could do for the pitch and walked in the room to get on with it.

What was I going to do if I didn’t get the commission? Make the film anyway? Of course, but I didn’t want to take the chance that Netflix or self pity could re-enter the equation. The commission was important, not just for the funding, but for being awarded the confidence and assurance that you’re on the right path, and that everything will be ok. Perhaps that’s overdoing it, but on a personal level it was what I needed for getting/moving on with life, and accepting change.

Since you’re reading this article you already know I got the commission. I’m not meant to be writing about that, or indeed my holiday to Venice, I’m meant to be giving you my tips. So I’ve narrowed it down to what I think is the single most important thing to take on-board when applying to Bridging the Gap.

You have to want it, not just like you want a ps4 for Xmas, you have to want it like life won’t be good enough without it. You need to know why you’re doing it and where are you heading in the grand scheme of things? What will this commission do for you on a personal level. What’s at stake? Why should anybody in the world care about you or your film?

Want it enough, and you’ll make it happen.

(and whatever you do, don’t travel to Venice alone.)

Duncan's Bridging the Gap short Directed by Tweedie is currently being submitted to festivals whilst he develops his next project. He's ran out of family members to film, so if you know anybody that might be keen to get their intimate personal lives invaded by Duncan and his camera then please get in touch.