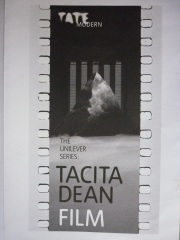 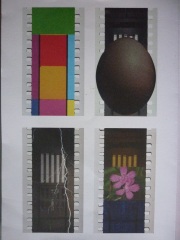 Dean is a video artist who loves working with analogue and through this 11’ film wanted to celebrate that medium. She got unique chance of doing it by being commissioned by Tate Modern and celebrates their eleventh year with an 11’ film, to fill the gigantic Turbine Hall, opening on the 11 October 2011. The precision of film!

Over the last few years she has been raising her concerns about the threats hanging over the medium with so many labs closing down.  She compares the grim future of not using film with a painter “being told that paint will no longer be available”.  She is not being nostalgic for the sake of it but more interestingly defending the difference in process from working with digital and therefore bringing out not just a different aesthetic but springing different ideas in the making of the film.

I am currently running an experimental workshop with my students and very much arguing about allowing the process to create new ideas or at least allow ourselves as filmmakers to be surprised and thinking of the film as a lab not an end material. The constraints and discipline of working with a medium have an impact to shaping the final film.

FILM is a visual poem, an ode to analogue filmmaking. It is projected against a monolith at the far end of the Turbine Hall, making the architecture an integral part of the screening. The steel beams which clad the walls also structure the composition of the various shots. It is projected as transparent as a film strip with sprockets holes as if we see through the film itself. This is more than a trick as it draws attention to light as the essential basis of analogue.  Dean returned to the techniques and procedures pioneered by early cinema such as glass matte painting, multiple exposures, mirroring and masking, to create layered, collaged imagery. FILM  is a series of images: trees, tomatoes, fountains, grasshoppers, patches of very bright blocks of colours bringing us back to various painting references such as paintings of Mondrian – which of course links film and Modernism being born around the same time.

It looks striking and strange because the strip is in portrait, not landscape format, and is 13 meters high! Dean has turned a cinemascope lens by 90 degrees, achieving a verticality that mirrors Turbine’s Hall shape and proportions.

FILM is on a loop, allowing the audience to remain mesmerised for longer than the 11’.

Dean collected quotes from different filmmakers about celluloid  and one of my favourite was from Spielberg when he said “my favourite and preferred step between imagination and image is a strip of photochemistry that can be held, twisted, folded, looked at with a naked eye or projected onto a surface for others to see.”

Check out a short doc on Dean process of making FILM: