Last week Noé Mendelle was at Encounters Short Film and Animation Festival, presenting the best of our STORIES series – short films coming out of intensive documentary workshops we've run with British Council in the Middle East. And it brought back her memories of going to Palestine for the first time for the RAMALLAH STORIES and DOC EXPRESS workshops. 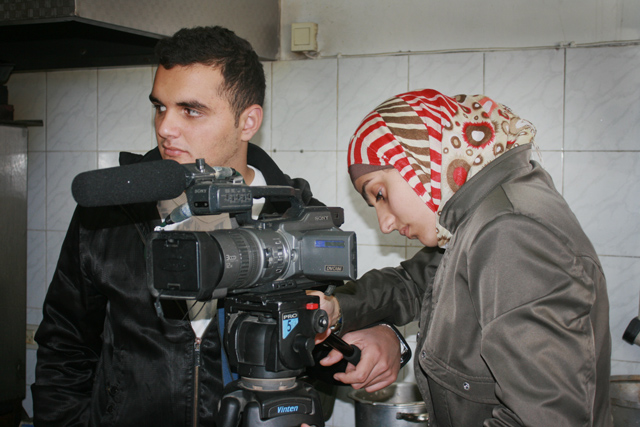 As you may know, in order to reach Palestine, you need to go through Israel.

First thing to do for myself and Flore was to get new passports. Travelling with our stamps from past trips to Libya and Algeria, that will not do. However much you prepare for such trip, it is never enough.

Tel Aviv airport is a spacious and rather subdued space: dull architecture, sparse images and whispered sounds. Of course, extremely well organised and controlled. At passport control, we get questioned about the purpose and destination of the visit before getting allocated a visa. My questioning was brief, and quickly assumptions were made about my "Jewishness" due to my name. Flore on the other hand had to sweat a bit more.  It was only at control number 2 that we both realised that had been given different visas. Mine got me through with a smile and a nod, Flore was once again questioned. On the return leg of our journey, it was even more accentuated. Every time, Flore's luggage had to be thoroughly checked, and she got questioned while I was receiving apologies for the delay. At the last check I was swiftly directed to the luggage X-ray for Israeli people while Flore was taken to a different queue, hidden from mine, and once again had to go through the rigmarole of more questioning and checks. Nothing threatening – but by the end of this trip we learned enough about Israeli psychological games at first hand to shift from feelings of sadness about the conflict to anger at this constant reaffirmation of their power and occupation.

We actually did two workshops while we were in Ramallah. One was a 3-day development workshop, Doc Express, with ten participants. Four of them were from Gaza, and the British Council had to apply for a visa for them in order to travel from Gaza (Palestinian territory) to Ramallah (Palestinian Territory).  Only two out of these four got their visas, and those were only granted on the last day of the workshops, making it pointless for them to travel.

The wall built by Israel to divide the territory is made either out of ugly concrete slabs or barbed wire. I don't know if the Israelis feel safer in its presence – but it definitely traps the Palestinians. Different permits, different status, controlled at check points. If you travel by car or bus it means long queues, if you cross on foot it means walking through caged corridors like some metal tourniquet, turning the flow of Palestinians into a drip-feed. Spielberg could have used any of these check points in his Schindler's List movie. But that would have been too much of a political statement.

It is OK to cry about the past but not OK to make associations with the present? Do the abused always need to turn into the abuser?

On our way back to Tel Aviv airport at 5 in the morning, we saw a large gathering of Palestinian workers who had to be up at 3am or 4am in order to come from nearby villages, get picked up by their Israeli boss, and go to work on Israeli building sites. For that privilege they have to pay ILS 2,000 per month. But they'll still get a better wage than from anything available in Palestine.

I can’t even begin to grasp the resentment those Palestinians must feel to have to sell their labour to Israel in order to feed their own families. 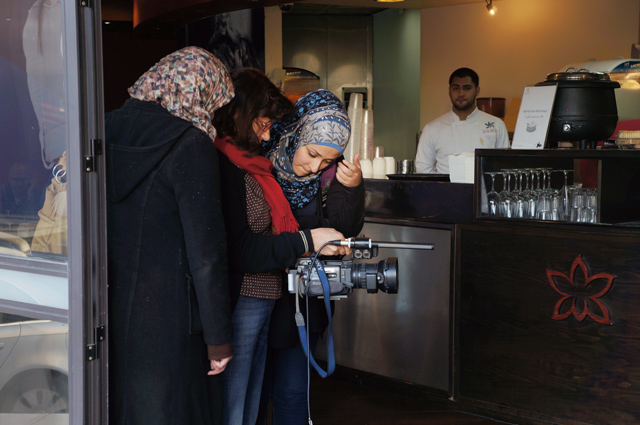 While we were there, it was announced that Five Broken Cameras had been nominated for an Oscar. I would have expected my workshop participants to rejoice – but no, the guttural reaction was anger: "Typical! Only a Palestinian film co-directed and produced by an Israeli filmmaker would gain such recognition." The film would only be used "for the world to think we could be together" but "it confuses the reality."

At the time I was surprised by this reaction, which was equally strong when I showed extracts of docs made by pro-Palestine Israeli directors. Had I not seen those Palestinian workers being kept at the check point in torrential rain at 5am maybe those reactions would not have made sense.

I happen to really like the film and was disappointed that it did not win. Five Broken Cameras is a polemical, emotional work. It presents with overwhelming power a case of injustice on a massive scale, and gives us a direct experience of what it's like to be on the receiving end of oppression and dispossession, administered by the unyielding, stony-faced representatives of those convinced of their own righteousness. But its true beauty is that it isn't vindictive and has a dignified sense of history and destiny. Much may be concealed, but what we are shown and experience is the resilient spirit of one village recorded by a single observer over several years.

The general feeling around any cultural mingling was the more intermingled Palestinians and Israelis become (through the occupation), the more impossible it will be to forge the peace sought by the international community. As Palestinians and Israelis become more and more inseparable geographically, the policies of Israel are becoming more apartheid in nature. As change and revolution has swept through the region in the Arab Spring, the 'Palestinian Winter' of occupation saw its 45th anniversary.

While settlements only cover 3% of the land of the West Bank, the extensive network of security apparatus, bypass roads, barriers, check points and walls occupies more than 40%. The result is a map of the West Bank that resembles a Swiss cheese. It is clear this facilitates the growth and development of settlements and shredding the Palestinian territory to pieces.

There is no surprise that most of the feature docs in development in our Doc Express workshop are stories with characters fighting for their land, Palestinians trapped in realities beyond their power and yet ready to take on the fight. Quiet heroes. Their stories will never make the headlines – but that is where the power of documentary kicks in, following their daily realities without dodging any of the contradictions. These projects in development are unlikely to get international funding but they will get made because the filmmakers are just as strong and determined as their characters. So next time you see a Palestinian documentary in a festival, go and see it because both the content and the filmmaking process will have been long journeys and those filmmakers should be celebrated.

For example, a beautiful short documentary, My Neighbourhood, is now available online. You can watch the trailer below and the full film on the Guardian website.

MY NEIGHBOURHOOD(directed by Julia Bacha and Rebekah Wingert-Jabi) tells the story of Mohammed El Kurd, a Palestinian teenager growing up in the heart of East Jerusalem. When Mohammed's family is forced to give up a part of their home to Israeli settlers, local residents begin peaceful protests, and in a surprising turn, are quickly joined by scores of Israeli supporters. Mohammed comes of age in the face of unrelenting tension with his neighbours and unexpected co-operation with Israeli allies in his backyard.
My Neighbourhood is latest short film by Just Vision, an organisation that uses film and media to increase the power and legitimacy of Palestinians and Israelis working to end the occupation and resolve the conflict nonviolently. Learn more about Just Vision at www.justvision.org

We also ran our 8-day Ramallah Stories workshop with the participation of 12 young filmmakers. Not only they were a delightful group to work with – half of them were female. Following our single token female participant in Libya, it was hugely encouraging to have those feisty young women embrace creative documentary with so much gusto!

As usual it took a while to find characters and stories. Themes are pretty easy to come by but stories are always on shortage. With just a couple of days for research, it is a tough call!

We ended up with these films:

The film takes us into a surprising flat in the suburbs of Ramallah and an even more surprising life style with icons usually associated with Western boys. Yet they were 5 independent young women living together and whose lives and work are dominated by computers and social media.

Today, women make up the majority of the student body in Palestinian universities. However, the official figures of unemployment show that it does not translate into better job opportunity for women. So it is great to see those geeky girls to create their own jobs.

This one is about young boys spending most of their youth selling things at check points to supplement their family’s incomes. The main character is a clever little businessman. He managed to play cat and mouse with the filmmakers and the camera and in the process sold them large quantities of useless merchandise!

It is about this artist who turned one of Ramallah old streets as his studio and exhibition area. His art captures the diversity of his city and its habitants. He is there to offer a service alongside the coffee seller.

This film is about an old Armenian couple who runs a pastry shop in Ramallah. She bosses him around but never stops loving him. He may have driven their last business to the ground and she is now very protective of this one but that is not a reason to question her respect for him. The film is an exploration of an old fashion relationship based on tolerance.

We were extremely well fed during the shoot and our young filmmakers fell under their spell. I think one of them definitely managed to fall in love during that week!

That’s documentary workshops for you!

Meanwhile the four short films have seduced audiences across the international festival scene from the UK to Poland and Canada. Next up are Arab Summer, African Dreams in Warsaw on 13 October and, for Check-Point Boy, the Nour Festival of Arts on 17 October.