Although this headline may sound like it, this is not really a post about the independence debate in Scotland. It's more about what independent filmmakers can learn from politicians when it comes to nation-building.

I explained in my previous post about the Virtuous Circle why it's particularly important for documentary producers to take their audience with them across projects, rather than starting from scratch with every film.

In tech speak, we want a toolkit that combines Customer Relationship Management (i.e. your audience) with a Content Management System (i.e. your films, each on a dedicated website) – and fully integrates with event management, fundraising and social media.

It was during last year's election campaign of the pro-independence Scottish National Party that I first came across powerful software called NationBuilder, geared towards political use but flexible enough to be used for all sorts of campaigns, including outreach to those niche audiences of documentary films...

Whatever your political colour is, you'll need to acknowledge that the SNP succeeded in identifying many new supporters and turning them into powerful influencers through social media. Complementing the SNP's bespoke Activate voter database, NationBuilder played a big role in this.

Can this political concept be applied to audience engagement? Coincidentally or not, it turns out that the SNP's New Media Strategist has a background in the film industry, so I asked Kirk J. Torrance for his perspective. This is what he told us today:

"As the market gets more crowded it becomes vital that film-makers make use of tools like NationBuilder to build inertia around each stage of the filmmaking process; making it easier to raise funds and crowdsource what's needed – all the while empowering audiences to help market the film and form relationships with either the film-maker, the film's characters, or both."

Having compared NationBuilder to other combinations of CMS and CRM, we decided to test it across various websites as part of our Virtuous Circle, an initiative supported by Creative Scotland. The first implementation was in the form of a website for the science documentary Stem Cell Revolutions, a creative collaboration between SDI's Amy Hardie and scientist Clare Blackburn. I then got hired as a NationBuilder consultant for Fredrik Gertten's Big Boys Gone Bananas!* which just premiered at IDFA and Sundance. And last not least, we're testing what this software can do for blogs like the one you're reading right now.

Please keep in mind you're looking at work in progress, as we still haven't explored all the options of the software. At the first glance, the front end doesn't look much different than any other CMS-based website. Yet what's really powerful is the private control panel that lets us identify our strongest supporters based on what they've done for us: Who is continuously spreading our message? Who has participated or even hosted events? Who has contributed to our crowd-funding? This NationBuilder screencast gives you a better idea of the back end:

Before this is becoming too much of a promotional post, let me point out that there is other software out there that does similar things – however, it's either open source and quite difficult to integrate, or it's much more expensive than NationBuilder. My main point is that documentary producers and distributors need a dedicated campaigning toolkit. 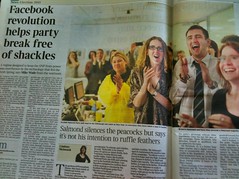 Having said all that – identifying your strongest supporters won't help you if you don't contact them individually, thank them, and ask them to do more. Only direct communication will set you apart from the anonymous mass-blasting. Let's make the comparision to the election campaign one more time. As described in an article in The Times, the online campaigners at the SNP headquarters were "at pains to stress that their work would have meant nothing without the real-life follow-up of door-knocks, the daily grind of an election. But every one of those digital contacts had an offline follow-up. Here, in this room, the technological foundations of a stunning victory were laid."

So let's try that and lay the tech foundations of sustainable audience engagement – and let's not forget about those "real-life follow-ups"! I'm dreaming of a landslide victory for Scottish Documentary...