Journeying into ideas about accounting and governance

"The unknown and the unknowable" — sounds like documentary making. But I'm talking about accounting.

Last year, almost by fluke, but not by coincidence, I joined the Human Business Group at University of Edinburgh, established by Professor Paolo Quattrone (@PaoloQuattrone) - the University's new Chair in Accounting, Governance and Social Innovation. After spending five years on the production of Future My Love, I'd become very interested in the junction of humanity and business: how we govern our affairs, how we count things, and how we represent them outside monetary terms. Paolo is a prolific scholar, originally from Palermo, who has studied and taught worldwide, including at Oxford and Madrid, before joining Edinburgh.

In 2013 I wrote a piece on how the triple bottom line might be applied to film — about independent film forever feeling poor in cash, but over-delivering on value and impact — and how the idea of finding metrics and value in cultural production seemed pertinent. (Triple Bottom Line companies report their value through their impact on all three realms: People, Planet, and Profit.)

Having talked to Paolo over the last year I realised something more fundamental, which should be easy to grasp for all filmmakers. How we frame the question, how we design a system or a report, presupposes or influences an outcome, an intention. It's much like Heisenberg's uncertainty principle. So in Paolo's opinion, how the triple bottom line is currently designed, and what it does or doesn't measure, leaves out far too much of the unknown and the unknowable to make it useful. It might as well be the continuation of business as usual.

What is it that needs to be negotiated in a more sustainable society? Probably not more numbers, or metrics, but a different kind of dialogue between more diverse voices. (Some of Paolo’s research goes back in time and into the accounting and procurement practice of the Jesuit Order, and the end of Italy’s IRI.)

But we’re lost in Big Data like never before, in the primacy of numbers and algorithms, and the automation of decision-making.

May 2015. I'm at the Business School, attending Paolo's two-day course on Numbers, Governance & Leadership for business CEOs. I want to know how Paolo’s concepts change or influence CEOs. These two days are all about styles of leadership, systems of governance and management control, and reporting systems...

When I had emailed Paolo saying that I wanted to attend, he just said: "Really?!" Really. While it sounds dry, this kind of stuff could be central to changing the world, which all documentarians have some sort of ambition about.

"Numbers don't speak for themselves," Paolo says repeatedly during the two days, as we learn about balancing and questioning "di-visions, in-tentions, in-differences". Slowly we begin to understand the concept: We need to reinstate balance (in-difference) across our systems, from how we create company structures, hierarchies, to what we return as value (currently only as profit). The balance sheet has a name for a reason.

He shows us examples of Ursus Wehrli's work, Kunstaufräumen, which illustrates his point well: a disorderly sandbox where a child enjoys playing with various toys and sand, vs. a raked sandbox where all the parts have been laid out by colour and size, much to the boredom of the child. And most likely it was done by an adult who is currently sitting outside the frame.

When we start to simplify, classify and clean up, we are not accounting for the inherent messiness of life and work. We're presenting a fiction, the mise-en-scene, as we may say in film. Incidentally fiction might be more inclined to the violence of simplicity than documentary, more hostile to breaking the fourth wall, and thus more viable for escapism and money-making. But humankind is hard-wired for storytelling, ordering and interrogation. It's about making sense, trying out conflicts, playing with our fears. When it comes to the fiction of numbers, we presume science and facts. We are assured. It's the end of fear and conversation. Looking at numbers, bottom line and the profit matrix, we’re forgetting our blind spots, how we arrived there, and what is missing from view. Paolo thinks we need to find a governance and reporting structure that embraces complexity, and does not suggest the illusion of control. One that opens up conversation between stakeholders.

There is a reason why we say "a picture is worth a thousand words." Numbers always seem to suggest facts. "Numbers don't speak for themselves, remember!" Perhaps film is good at certain complexities: it can cut to the the frame outside the previous frame, track and fly and rotate and zoom. It can work on emotional, intellectual, sensual, ethical levels. The growth of film as a tool, the explosion of YouTube, is perhaps indication enough that our literacy of media language and representations is on the increase. Will it allow for more complexity, better communication and reporting in the future?

Long-form documentary (along with non-fiction writing) has become a vital tool to explore the complexities of politics and society — be it through films like The Inside Job (on the financial crisis) or Dirty Wars, or The Act of Killing. It has become a way for companies to get involved in change (supermarket chain Waitrose and The End of the Line), thereby representing their business in a different way. Maybe we should send a host of documentarians into big business, looking for the blind spots.

During the two days we discuss a case study of a construction company producing regular project management reports (IORs) that, while containing "numbers", are mainly made up from estimates and indicated costs. The IOR is merely used as a vehicle to cause dialogue between the different team members and the building owner, conducted via regular meetings, where the actual decisions are made and costs get controlled. Paolo calls this "creating a visual performance space".

I can relate to this somewhat. How to take the notion of a cost report and actually make it useful is not something I have spent a lot of time thinking about. I've instead accepted conventions, templates, Excel sheets, but not interrogated their usefulness, and struggled to improve them. Film production, especially documentary, is full of assumptions, unknowns and the unknowable. Not in the least this: When will the film be finished?

"Civilisations fall, people move on. This is us," says Maja Borg in Future My Love.

Paolo talks us through the "tyranny of transparency" and the need for both transparency and opacity. We assume to provide transparency or certainty through our financial reports to all sorts of stakeholders: shareholders, accountants, suppliers, banks, customers. Yet we don't realise that our reported figures are merely a veil because accounting is not a simple "answering machine" (question in, answer out) but an "ammunition machine" (to defend our plans), a "rationalisation machine" (to defend our past choices) or a "learning machine" (for example in the budgeting process). It often ignores what we cannot know, and it does not invite questions. 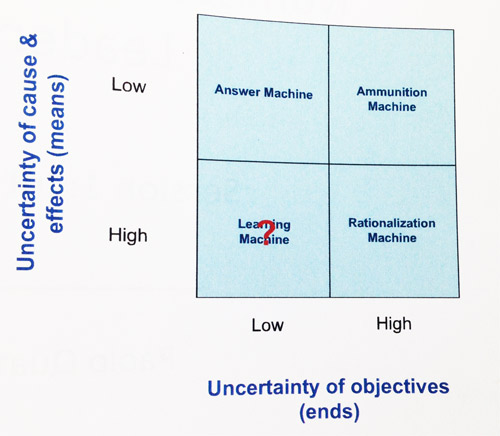 How do we produce a space, reports or mechanisms that invite questions and open dialogues rather than shutting them down? During our two days most people admitted to writing reports in such a way as to "get it through the board." At a society level, how do we allow for complexity without over-complicating? How do we engage? How do we embrace the evolving nature of decision-making, allow diversity of viewpoints, and the shifting sands of facts and figures?

I'm excited to find out how to visualise the next stages of these concepts. If you are interested, get in touch.

In my next blog I will talk about Paolo's “maieutic machine” (from Greek, “pertaining to midwifery”).