So here's an idea.

Last week I attended the Global Entrepreneurial Leaders conference, in short GEL, organised by the Scottish charity WildHearts and hosted by RBS in its campus-like headquarters in Edinburgh. As a filmmaker, it is rare to find yourself in the presence of politicians, billionaires, bankers, accountants, school kids, teachers, the third sector as well as an inspiring businesswoman from Uganda – at the same time. At the core of the conference was the idea of compassion in business and celebrating 'entrepreneurial spirit' in Scotland and beyond as a way out of economic and emotional poverty. 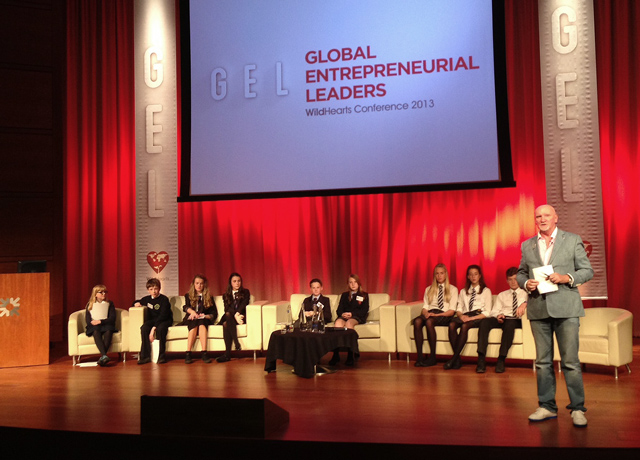 How did I find myself there? A free ticket. Why I got that is less interesting than how GEL made me think and feel. Listening to WildHearts' thought leader and founder Mick Jackson (a former musician), to big-name representatives from RBS (Chris Sullivan), to the Scottish Government (John Swinney) and to Tom Hunter (pictured), digesting the discussion of entrepreneurship and values among business leaders, I got a sense that perhaps the film industry has a way to go itself, implementing 'compassion' in its processes.

Even I catch myself thinking, well, "I work in documentary, aren't we contributing enough 'compassion' or social impact, by just doing what we're doing?"

David Adair, Head of Community Affairs from PwC, talked about their projects in corporate social responsibility and mentioned the concept of a 'triple bottom line' (TBL), complementing the traditional bottom line (profit or loss) with two more 'bottom lines': social and environmental concerns. The three together, often paraphrased as "profit, people, planet", are now emerging as a new way of accounting for publicly held companies.

It reminded me of how we've been meticulously measuring SDI's impact – thanks also to Forth Metrics director and SDI consultant Dave Cumings' obsession with measuring. We've been counting supporters, volunteers and prospective followers; measuring social media engagement, website traffic and trailer conversions; assessing our reach online and offline – partly because we can, but partly because we want to start formulating what we can do with these numbers.

Is it time to define new metrics for social impact of film?

Could a new triple bottom line satisfy our funders and investors alike? Is it still legitimate to measure a film's success only at the box office and in other sales? Shouldn't we embrace a TBL too? To a certain extent, such 'soft measurement' is already accepted when festival successes or numbers of screenings are reported to film funders. But as we develop new roles such as the 'Producer of Marketing and Distribution', and as we are using more and more online tools, aren't we creating a whole new set of metrics and building new social assets?

Social impact is certainly what we aim to prove with I Am Breathing's outreach concept, and yet I haven't really come across a template for analysing such impact of a film – or the film business as a whole. The End of the Line did a comprehensive study on its impact – and it is recommended reading. But how could we create a template to help us all start measuring and analysing the right stuff? Will it fail at the age-old hurdle that we can't – or shouldn't – give arts and culture an actual value? But rather than integrating arts into the "creative industries" – how about doing the opposite, and measuring actual cultural value?

Critics of the TBL say that it can be a distraction from the core competency of a business. But looking forward, how can any company in any sector not embrace a code of ethics, a value-led way of looking at its business decisions and impact? A true virtuous circle?

At the GEL conference, the CEO of energy services provider The Wood Group, Bob Keiller, told the story of how his company arrived at its deep set of values which guide its business practices every day, and also positively impact on its economic bottom line. How a decision was made to support an employee's expensive medical costs, indefinitely, because of a strong belief and implementation of the company's values.

I certainly don't know how an 'industry' that is struggling to survive (I refer to independent film here, of course) is supposed to afford an even more complex accounting practice. But what if monetary recoupment was just one of the measures? What if, by showing the social and environmental impact you make, you are rewarded by future investment, funding or sponsorship, which reinforces your sustainability as a business? What if we could arrive at rewards for positive audience engagement, social or environmental impact? We wouldn't just be chasing money but using positive social action as our leverage.

Right now I haven't got the slightest idea how you even begin to embark on such a project, but I'd love to start the debate on it. After all, even in traditional economics we accept that the way companies are valued (or hyped) are never just to do with hard cash.

We will start to dig around this issue a bit more, but would love to hear your thoughts. Just comment below or tweet using #filmTBL