We are getting ready for a new year of Bridging The Gap. Running up to the opening of our call on 2 September we will publish blog posts from four filmmakers selected in the previous call. They will share what it means to be Bridging the Gap alumni – and give you tips for a good application.

The first post comes from Genevieve Bicknell, an artist and ﬁlmmaker based in Edinburgh who came to ﬁlm by way of social anthropology and then painting. Her work explores themes of family, memory and of how we relate to others and to ourselves. 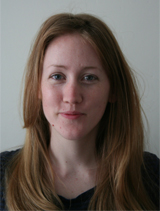 It's hard to express just how great an experience Bridging The Gap was. We got in-depth feedback on our projects from top international filmmakers, the expertise of the Scottish Documentary Institute whenever we needed it, both creatively and business-wise, and we were able to pay people to work on our films (I even had enough left over to pay myself). This mixture doesn’t happen often, so to my mind it's pretty special.

It is a lot of work, especially if you are trying to balance it with another job. During the editing stage of Swallow I felt like I was working on it every minute of the day and I regularly hated the film. But that's a normal process for me and even in the depths of despair I never regretted applying.

Thinking back, it was the sharing of ideas with the other participants and later my crew, that really made the experience so worthwhile. There was such commitment and energy and support, it was a very exciting process to be involved in. I discovered that many had applied to Bridging The Gap before and so perseverance definitely pays off, it's probably a matter of finding the right project.

I applied just after finishing my Masters and still felt very uncertain about my abilities, but now I’m beginning, on occasion, to call myself a ‘filmmaker’. My next project is with SDI again, making a 15-minute film about the Commonwealth. I’m also starting an experimental collaboration with friend and filmmaker Matt Robinson.

Genevieve directed the film Swallow (9'28'', 2013). She mixes together personal stories with 8mm and 16mm home movies, sifting themes of memory, family, love, pain and power as the centrality of food to our lives is explored: "Food is ephemeral. It’s just for you, just for that one meal, and it’s gone."