The Scottish Documentary Institute has been commissioned by Aljazeera to make a six-part series on Poets in Protest. One of them is on the Sahrawi poetess Khadra who happens to be an old lady living in exile in one of the Polisario Camps in the middle of Sahara.

For those of you who do not know about the Sahrawi cause, these citizens of Western Sahara not only got colonised by the Spanish many moons ago. Once they managed to become independent, the Morrocans moved on their territory, pushed them out, and build a 3,000km wall around it. They also planted over 8 million land mines to make sure that the Sahrawi will not cross back into their land. Algeria gave the Sahrawi liberation movement, the Polisario Front, refuge on its territory and set up several camps for people to live – and so they have for the last 35 years. The war has moved into diplomacy rather than military and therefore they now live peacefully in those camps but In a state of complete dependence on international aid.

With Roxana Vilk, the producer of the series, we decided that Al Khadra will be the perfect example of grassroot poetry. She uses words instead of bullets in order to express her anger at Morocco's invasion.

A few months ago, four Spanish NGO workers got kidnapped. So for security reasons, we decided that the production team will be just me and Luis Correia as DoP plus a local fixer/ translator. The different camps are south of Tindouf, that is a two-hour flight from Algiers, in the heart of Sahara. Thirty years ago I visited that part of the world, so I knew what to expect, and for the last nine years Luis and I have been running doc workshops and filming in Africa – and managed to laugh and smile in face of all difficulties – and believe me, they are many!

I hope this diary will make you want to see the film. The Sahrawi people are beautiful and funny. Their cause deserves to be heard and resolved, and Khadra with her poems and her family became great ambassadors, sharing their feelings with us.

The film is meant to explore all those issues through her words and her community. The plan is to fly to Tindouf. After many forms and questions, we managed to get a visa from Algeria for one week, which leaves us with six days to film.... that is if we ever get there. Luis and I and our equipment managed to get to Barcelona and then Algiers without a hitch. But there it took two hours to get through customs. By then our flight to South Algeria had left. We had to go to Air Algerie and beg them for two seats on the next flight, which luckily was only 28 hours later. The waiting list was already full, but they felt bad enough to promise us an attempt to squeeze us in.

We collected our bags and ventured into Algiers city centre. I was there 20 years ago, researching a documentary for Channel 4. I got caught in their civil war and it made those two weeks the most terrifying moments of my life. I had sworn never to return. Now I was delighted to find a renewed city, with people – even couples – strolling around and enjoying city life. Streets are clean and lit by all the boutiques around. We went to stay in Hotel Suisse where I had stayed previously. 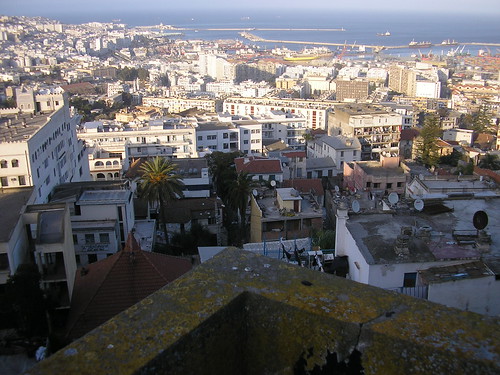 1993 was a dark era for Algeria. Fundamentalism was taking over the country in a vicious civil war. Bombs exploded in different parts of the city with no warning or respect for civilians. I was told by my contacts in Algiers not to stay with them or be seen with them as anyone linked to Europeans could be targeted. Everyone was scared. I had no idea how bad it was and was amazed that I had got a visa. When I arrived at Algiers airport, a bomb had just exploded there a few days before, killing hundreds of people. Bits of flesh and blood still stuck to the walls.

I should have known better and just turned around and caught the next plane out of hell. Instead, I decided to catch the bus into city centre, rather than a taxi, trying to compensate my fear with stupid bravery. I was the only woman in that bus and immediately a guy started chatting me up. And when i got off to go to my hotel, he followed me into the lobby despite my pleading. The receptionist looked at me suspiciously and ignored my reservation and instead proceeded to ask me about where my husband was. Ooops, I had forgotten to bring him! I thought passport and money was enough for travelling.

Never mind, there are plenty more hotels in city centre, walked into another four-star one, still followed by my stalker – and the same thing happened, denied a room because I was a single woman. Another hotel, ditto. By then it was getting dark. Standing on the main square, I was yelling at my stalker to piss off and leave me alone, which of course attracted the attention of the male crowd, which made me feel even more scared and claustrophobic. I tried to yell at taxis to stop. None did. My levels of anxiety were higher than ever. A guy pulled up a fancy car and asked me if I wanted a lift somewhere. I jumped at that wonderful offer, but hey, out of the fire into the frying pan! He started proposing that we should spend the night together. I told him that I was expected at friends and handed him the address of the flight attendant who had chatted me up on my way here. I don't normally attract the attention of men in such fashion, but it seems that men in North Africa feel compulsed to chat up every women regardless of age and shape.

I had laughed earlier when this flight attendant was presuming that I would come and join him at his flat later that evening. Little did I know that I would get so desperate for a roof over my head that I would take up his offer. I knew there was a shortage of housing in Algiers so I assumed that he would be living with his family. Another young man opened the door, reassuring me that Mohammed had rang to warn him that I might come round. I took a deep breath and realised that sometimes there is a need to take a leap of faith in humanity and hope for the best. So I explained to him the difficult situation that I had found myself in, and asked if I could possibly stay in his flat for the night. He let me in and treated me like a queen with food, drinks, pleasant conversation, and above all – respect. Later on, Mohammed arrived and was rather miffed to hear that I was not there for his advances. Once I had told him that I would love to exchange currency he was happy to oblige... 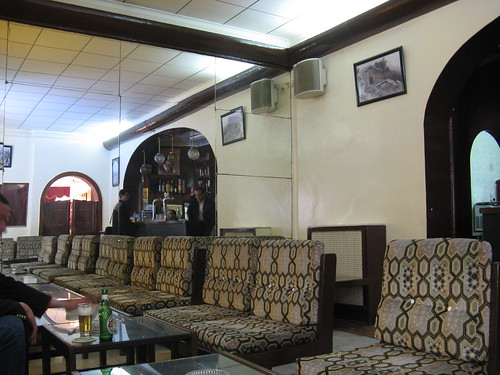 The following day he took me to Hotel Suisse and advised me to tell the receptionist that I was a friend of Hatif, an influencial business man in import/export. So I pretended to be a friend of Hatif. It did the trick, the receptionist did not bother to ask me about my husband. I stayed for two weeks, and once in a while I would get phone calls from people wanting to know about the whereabouts of Hatif. I remained as vague as possible. Those were two weeks in hell – and I returned to London with nothing to show as all my tapes had been confiscated.

Twenty years on, this is still very vivid in my memory.