No matter how experienced you are in documentary filmmaking and all things African – no shoot is like any other. And in particular, this shoot is like no other. Trapped in what has been described a 'closed society' – the Bijagós archipelago – Noé Mendelle struggles to find some sense of balance between traditional and modern influences. When a blog becomes your only place to vent, irony is inevitable. Raw, unfiltered and dispatched on the same day, here is the latest post in her series.

Cinema on a motorbike

Today we went on filming our sculptor and our canoe maker doing some interesting interviews, but you can catch up with those once the film is finished.

Living up to the Scottish Documetary Institute's philosophy of bringing films everywhere, we did the first-ever cinema screening on the islands of Bijagos. In fact it was the premiere of a film my co-producers Luis and Sana had shot in the villages we are now filming. The idea is to bring back the images to the people who had taken part in that film and also welcomed us in their space.

We had to travel to the village on our motorbike which keeps running out of petrol. Of course we ended up carrying a generator, white sheet, speakers, projector, etc. Most of the people tonight had never seen any moving image, let alone a two-hour film. It was mayhem trying to put up a screen against a house. No nails to fix it! 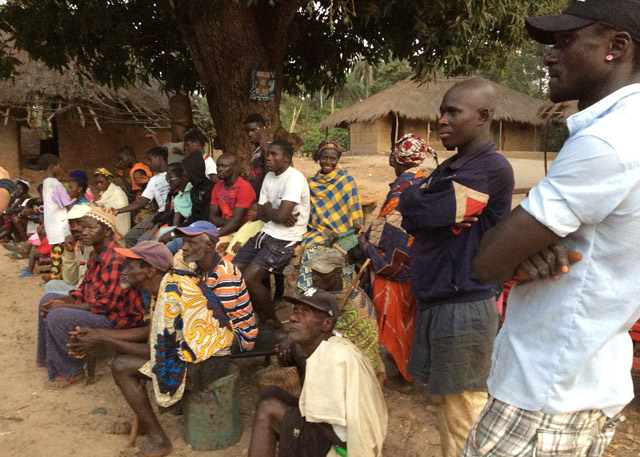 Somehow we managed. Then we had to calm down the kids who came running with their little stools to make sure they were at the front.

There's no need here to ask for mobiles to be switched off, but we ought to ask to switch off pigs, goats, chickens....

Darkness kicks in rapidly. We switch the projector on. Silence sets in until they start recognising each other, and laughter spreads. It is amazing how people seemed to be reassured by images of objects and people they can recognise. Even the dogs start barking when they hear themselves on screen.

It is a major success. They want to see the film again tomorrow... I can see a new addiction coming up!