Bill Binney is not mincing his words. In a rallying battle cry against mass surveillance, the former NSA analyst tells an audience at the UK premiere of A Good American that we are basically at war. In every democracy across the world; in our very “hearts and minds”, a war “against the totalitarian temptation” is being waged.

Perhaps because Binney is such a quiet, considered man, his words seem to carry extra weight. But it’s not just his solemnity that captures attention. Binney is not just a campaigner for civil liberties, speaking of principles and rights. He was on the inside – one of them. A high-level NSA analyst, technical director, and one of the best mathematicians the agency ever had, Bill Binney was their man for 32 years. And then, suddenly, he was their enemy. 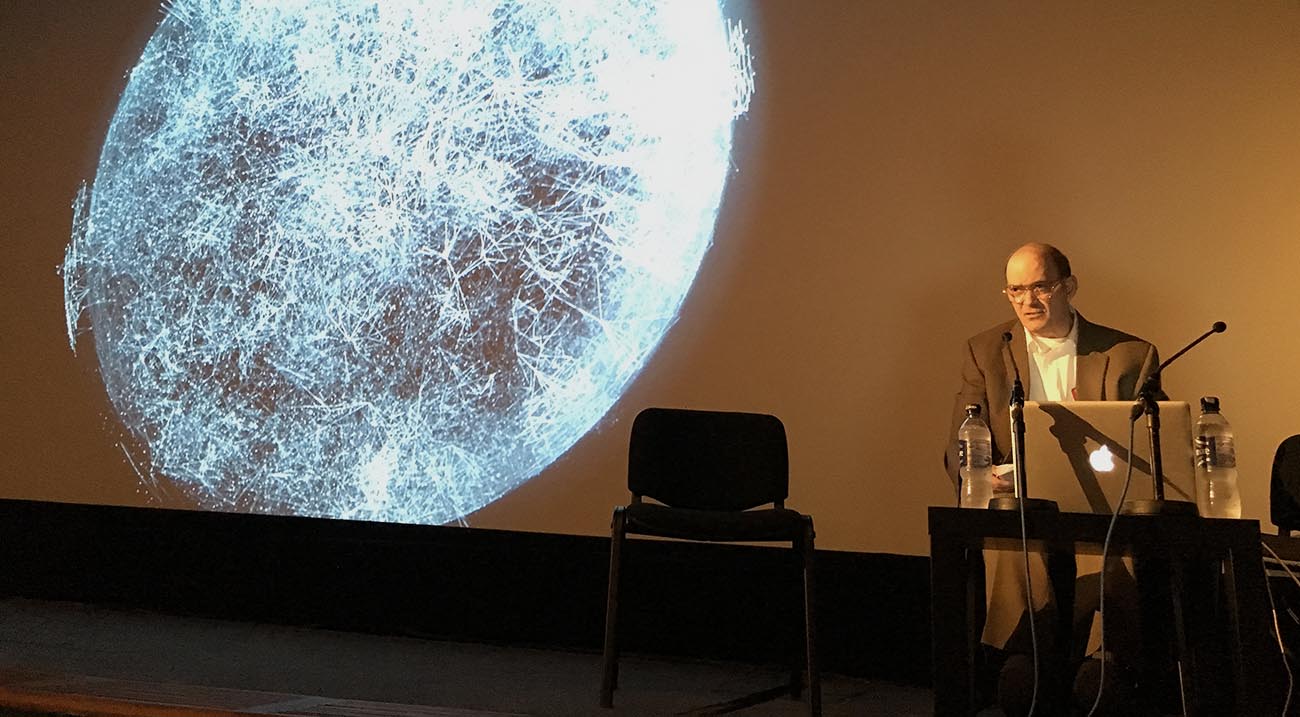 A Good American tells the story of Binney’s life work, and his persecution by the government. Summarising the situation for the audience at the Take One Action Film Festival, Binney runs through every major terrorist attack in recent years. Madrid, Boston, 9/11, 7/7, Paris, Orlando, the list goes on. “All preventable”, he says, glumly; “all we needed was to watch the metadata.” Instead, the NSA dragged in all the content, swamping analysts with unmanageable volumes of information. They’re still doing it now – NSA, GCHQ, French security and others – trampling privacy and missing clues. It’s this that makes Binney so angry.

Thankfully, he found someone who would tell his story.

Friedrich Moser, the film’s director, takes questions on the stage alongside Binney. From a filmmaker’s point of view, Binney must be a real treasure – a subject with a fascinating biography which tells a story affecting everyone; a character who also happens to be passionate, intelligent and inherently likeable. But Moser clearly cares deeply about the message of the film too. “It’s my duty as a citizen to stand up against this corruption. It’s destroying our democracy, inside out”, he says, referring to the outsourcing and privatisation which seemed to lead to so many bad decisions at the NSA (see our article on that here).

"It’s destroying our democracy, inside out." – Friedrich Moser

Moser recalls being extremely shocked when he first heard Binney’s story, and began researching the issue himself. An audience member asks why government agencies are allowing such huge mistakes to be made. “It’s a business model”, Moser replies, bluntly. “Each attack brings bigger budgets.”

“Are there analogies with GCHQ?”, someone asks. And yes, in case the Scottish audience could feel comfortably removed from whatever madness is happening in America, Binney confirms that British spy agencies are just as bad when it comes to mass surveillance – something revealed in the Snowden leaks three years ago. There’s a need, Moser adds, for more investigative journalism and activism around Britain’s spy agencies. What contractors, what deals were brokered, how did we get into this mess? “We need to put pressure on our governments, on those responsible.” 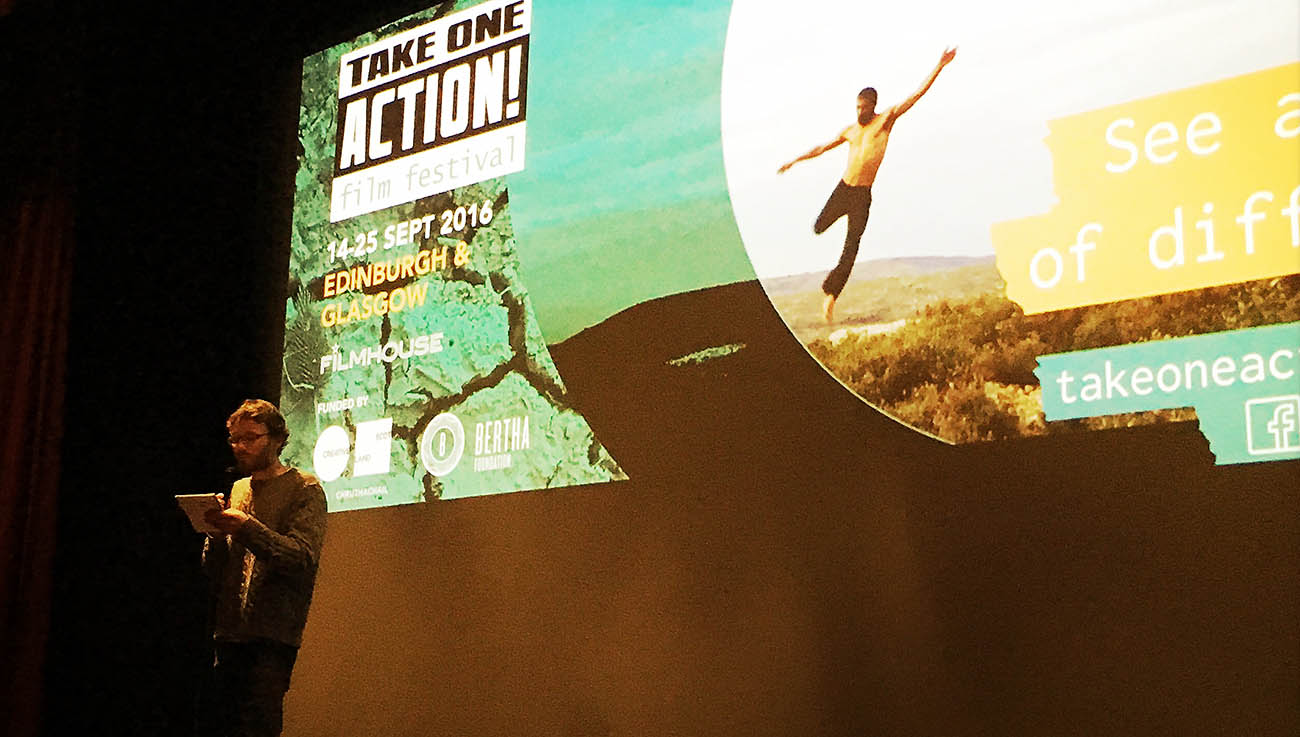 His plea ties in with the overall message of the Take One Action film festival, a yearly ten-day programme which brings together activism and documentary films. With the notorious ‘Snooper’s Charter’ bill about to pass into law, the urgency is clear. “We have an opportunity now be in dialogue with law-makers, to change the bill”, says Simon Bateson, artistic director of the festival, as he opens the Q&A.

In just over a month the House of Lords will consider the bill for the third and final time. Any chance to amend the legislation should be seized, Bateson says, and recommends the site WriteToThem as a useful tool to pressure peers.

"Indict them, make them explain what they did, and put them in jail." – Bill Binney

But are the authorities susceptible to pressure? Moser is asked whether he encountered any problems, perhaps even received threats, when working on the film. He chuckles. “No. But no encouragement either!” The existence of the crucial Pentagon report which features in the film gave them a reasonably firm legal grounding (to find out what it says, you’ll have to watch A Good American…). But Binney argues that the NSA really feels no need to threaten anybody over this exposure: it has become almost immune to criticism. “They were caught lying to congress, lying to the public. They have so much power. What are they going to do?”

It’s not such an empowering thought. Like battling the Home Office over its treatment of asylum seekers, you can feel, with surveillance issues, that the distance between activists and these vast government institutions is just too wide. They don’t care. But Binney disagrees. It’s all about exposure. 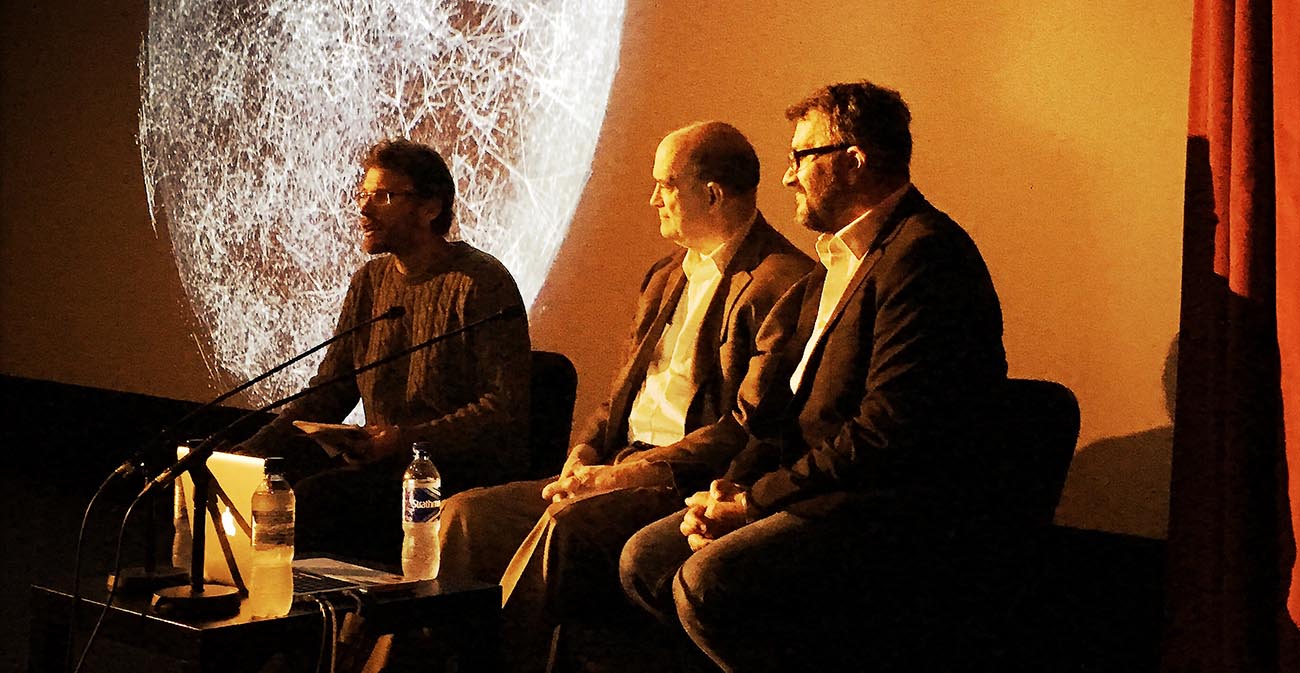 “Sunlight is the best cure”, he says with a grin. “Expose what they’re doing. Actually – court is better! Indict them, make them explain what they did, and put them in jail.” There’s a few cheers in the crowd.

A Good American has two more screenings in the Take One Action festival before launching in London this weekend, and director Fritz Moser is also fitting in a workshop for budding filmmakers at the Scottish Documentary Institute (pictured below). We spoke to him after the premiere, and he told us why events with political action at their core appeal to him.

“I think that as a documentary filmmaker doing political films, this festival is what I’ve been after the whole time. If you’re making documentaries it doesn’t stop with delivering the film and handing it over – it’s your baby, you care about it. You always have a message; there’s a reason why you're telling the story you’re telling, and it’s inherent to documentaries to generate some sort of impact.” 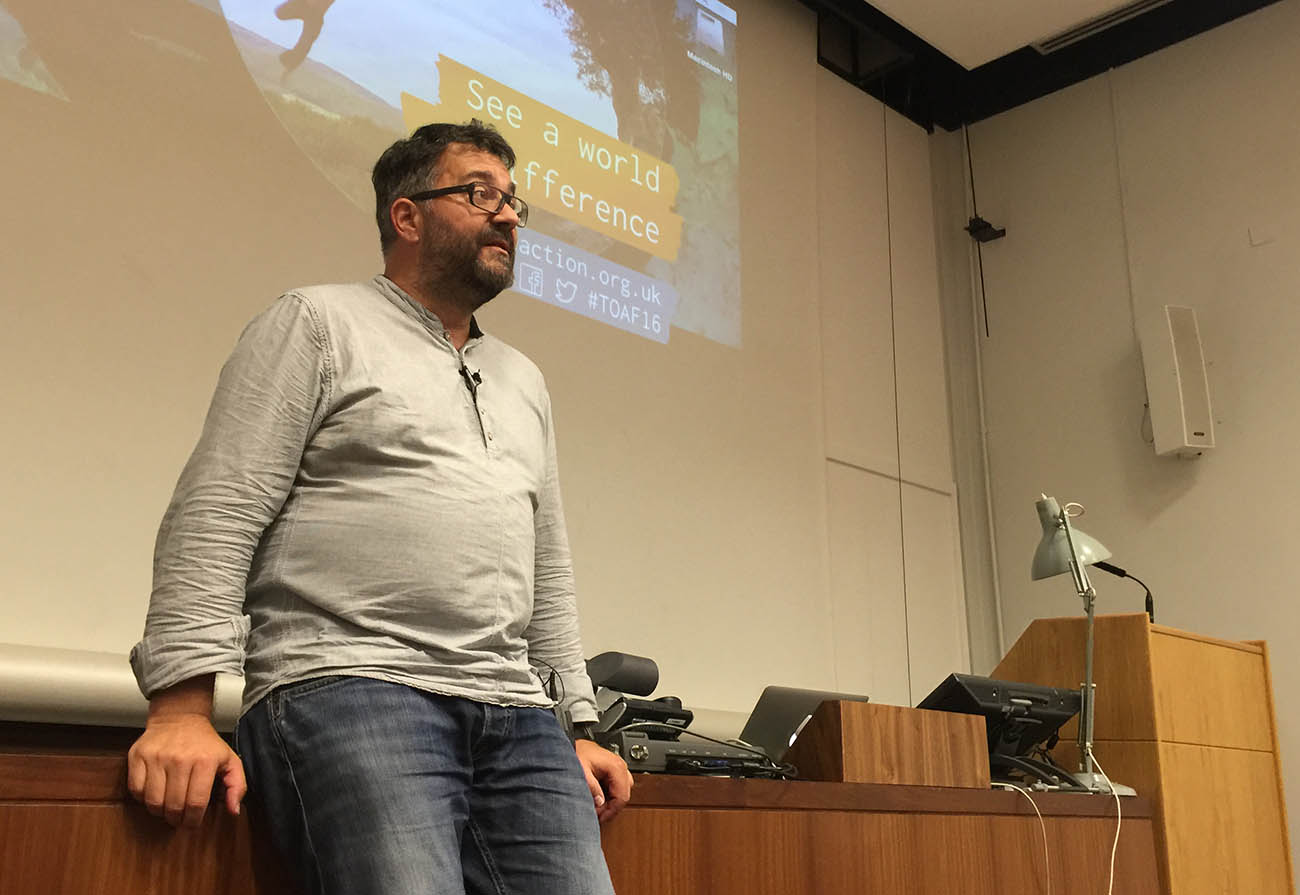 For people who want to change things but aren’t sure where to start, documentaries are great, because as Moser insists, they “really do change the world”. An example he gives is of Edward Snowden, prompted to become a whistleblower after watching Daniel Ellsberg’s story in the film The Most Dangerous Man in America. Snowden then started to talk to Laura Poitras (director of Citizenfour) when he saw her short film profile of Bill Binney in the New York Times. Obviously other factors pushed him to take action, but engaging films can be a strong trigger.

"A powerful film... a prequel to SNOWDEN" – Oliver Stone

Influential director Oliver Stone has already dubbed A Good American “a powerful film” and the “prequel” to his new thriller Snowden, which has been described as “the most important and galvanizing political drama by an American filmmaker in years”. Its US release has coincided with calls for Snowden to be pardoned and allowed to return from exile in Russia. 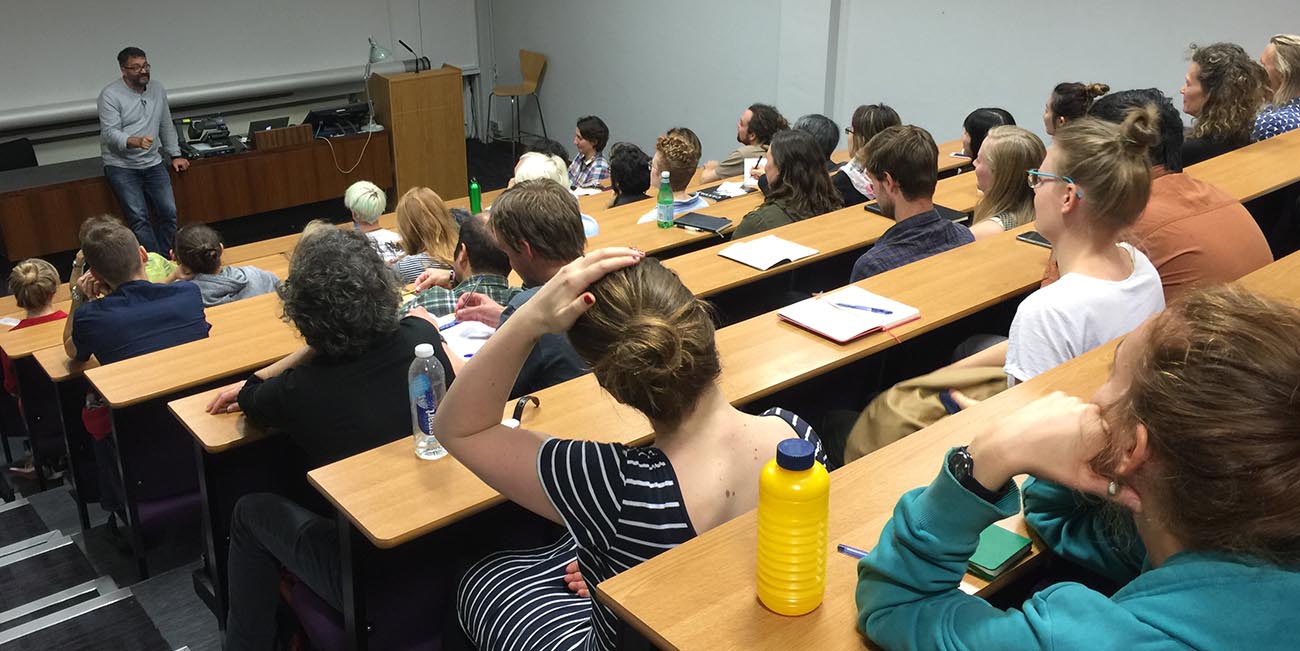 Moser thinks the power of documentaries is partly down to the emotional experience viewers get. “That’s how we’re different to the news world. We can go into a topic and provide somebody’s shoes for the viewer to walk in; a completely different world than her own. In the end, it’s about an emotional journey we are making in somebody’s environment, in their lives. This is the most important thing we can provide, this experience. This, I think, provokes change.”

If you’re in London and want to put your own questions to Binney and Moser, A Good American will be shown in a Guardian Docs screening at Picturehouse Central on Saturday 17 September and at the Phoenix Cinema on 18 September, both followed by a Q&A, and each featuring a special guest in addition.

A Good American – now launching in the UK

Moving Docs is bringing A Good American to cinemas across Europe. Screenings are ongoing in Spain; launching this week in the UK, together with Take One Action and The Guardian Live; and from 12 November in Greece.