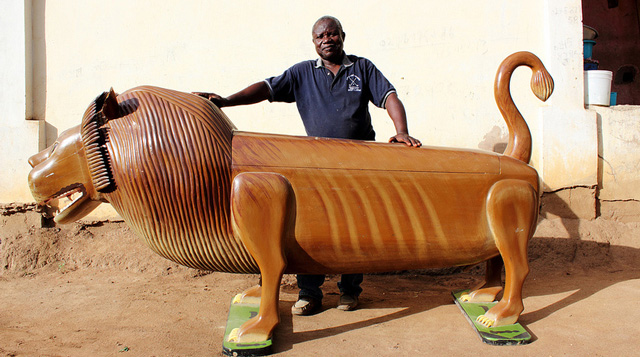 Benjamin Wigley tells us about his journey from discovering Bridging the Gap to his first feature documentary celebrating master craftsman and fantasy coffin pioneer, Paa Joe – and how we all can help him finish the film.

Prior to the Bridging The Gap programme, I had made In Search of the Vissarion, following a Siberian community convinced that their leader was the Son of God. I travelled out there on my own and came back with 30 hours of footage. I wasn’t able to get the support I needed in post-production and so the film took three years to complete under the guidance of my old filmmaking tutor. One year later a film with the exact same subject was made for True Stories. I was disappointed – but at least I knew I had found a good story.

At that point I had little faith in the filmmaking “system” and felt that people rose to the top through nepotism and good fortune. But when Noé came to the East Midlands and spoke about Bridging The Gap I was really excited about her response to my idea.

The theme that year was ‘Surprise’, and I racked my brains to try and think of something unique to pitch. Then my wife told me about a post she’d seen on Paul Smith’s blog – he’d been receiving unwrapped and stamped objects through the post from an unknown sender for the past 20 years! I pitched this to Noé, she liked it, as did Anna Seifert-Speck, who at the time was with EM Media, so the next challenge was to get Paul Smith on board.

But how do you get the attention of an internationally recognised and famous fashion designer? I couldn’t just send him a letter and a DVD of a sketch of how I wanted the film to be, he’d never bother opening it. Then I thought back to the theme and thought about what you get ‘surprises’ in. Cereal boxes! You get surprises in cereal boxes! So, Wigley’s Posties was designed and made with the trailer, the letter and the Bridging the Gap flyer inside. I wrapped the box up in string and put stamps all over it, like all the other objects he’s been receiving. I did the same thing with my application to the Scottish Documentary Institute. The result was P.S. Your Mystery Sender.

The Bridging The Gap workshops were great – I was introduced to industry experts who helped me understand a lot more about structure and story. Through them, I found out about another great doc. scheme, Documentary Campus Masterschool, the programme that became my next adventure with my first feature project, Paa Joe & The Lion. 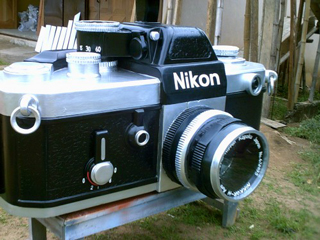 Paa Joe & The Lion follows the highs and lows of one of Ghana’s greatest artists and the grandfather of the fantasy coffin trade, Paa Joe (this is a picture of a camera coffin he made).

Coincidentally and rather wonderfully, it was through Paul Smith’s blog that I first saw these fantasy coffins. He had a picture of a Mercedes Benz coffin on there and details of a tiny exhibition at the Jack Bell Gallery in London. So I went to the gallery, spoke to Jack and through him got the contact details of Paa Joe himself.

Fours years on, I’m still travelling on this roller coaster with Paa Joe. He’s struggling at the moment and is trying to reinvigorate his business so he can buy himself back into the thriving funeral district in central Accra. Funerals and coffins are big business over there, the caskets are made as representations of the deceased’s personality/profession/ambition. Over here we look at Paa Joe’s work as ‘art’.

The thing I love about Paa Joe’s coffins is similar to what I love about the mystery objects that Paul Smith receives. They have meaning and story inherently in them. With the mystery objects, it is the story of the person who has sent them, what and why they’ve sent them, The adorning of stamps and the process of going all the way through the postal system, unwrapped yet anonymous.

With the coffins, it is the story of the person for whom they are made, and the journey that the soul is going to take to the afterlife. And the ephemeral nature of the coffins makes them all the more powerful. Often they’ll be buried in the ground with the paint still wet! For me, this captures the idea of life and death perfectly in one object.

Developed as part of Documentary Campus Masterschool with support by CBA WorldView and Creative England, the project even secured finance from Arts Council England and National Trust in the Midlands to enable Paa Joe to fulfil one of his dreams, building a coffin in the UK. This has been an epic journey and I’ve learned a lot about being an independent filmmaker, one very positive aspect being that I have the freedom to work to my intuition rather than to fit a particular broadcast slot of format and I think for a debut feature film that’s incredibly important. 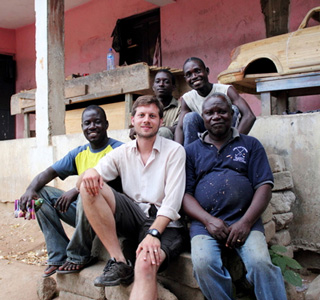 I have always said that I imagine, stylistically, that Paa Joe & The Lion will be the evolution of P.S. Your Mystery Sender. I like to discuss the relationship between what a subject thinks or dreams in relationship to what I see. I like the idea of approaching the line somewhere between fantasy and documentary and the role of the filmmaker and their intervention, and this film definitely discusses those.

The film is largely shot. I am just putting together the footage now and I need one final trip to Ghana to finish the film and find out whether Paa Joe has achieved his dream of moving back to the centre of Accra in order to save his business and leave a legacy for his son Jacob, or not.

For this we have put together a Kickstarter campaign in order to try to raise the money to finish the film. Like many independent filmmakers, we have turned to Kickstarter because it has a global reach and is very well recognised. But it is all or nothing so if we don’t reach our target by 12 November we won’t receive any of the money pledged – £15.361 so far. It’s totally terrifying! We’re offering some really great perks, including limited edition miniature lion coffins made especially by Paa Joe for the campaign!

Please have a look at Ben Wigley's Kickstarter page, pledge what you can and spread the word.