“We live in a time where if you make something you’ve got to be able to get it out there yourself,” says filmmaker Paul Fegan, whose first feature, Where You’re Meant to Be, get its European premiere at IDFA on Friday. The film has already done phenomenally well at home and internationally. Paul recently won a Grierson Award for Best Newcomer and a Silver Hugo for Best Documentary at the Chicago Film Festival, and the film has been screened more than 150 times at over 60 cinemas. 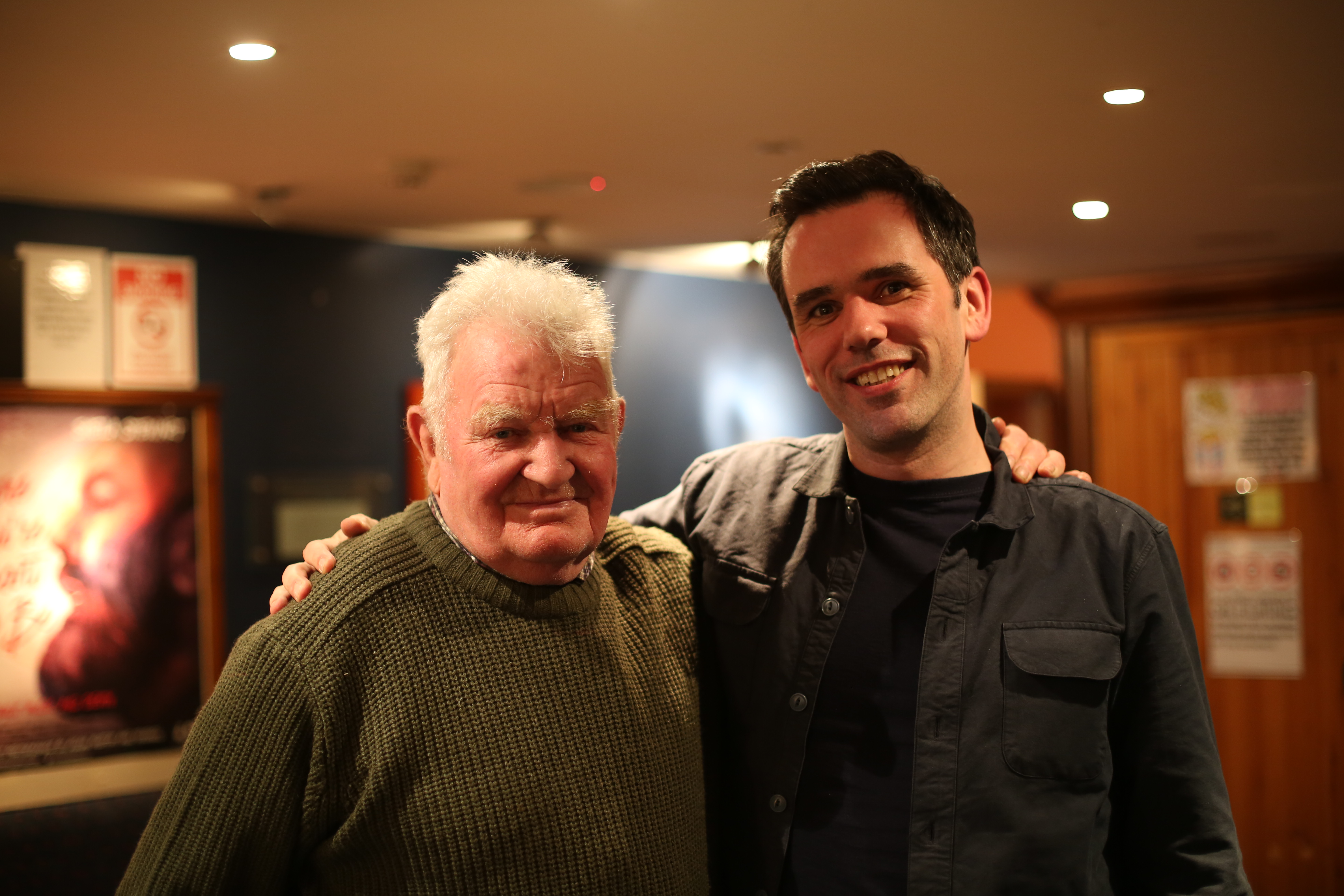 Paul Fegan with Iain MacDonald, a crofter from Skye who features in the film.

Before heading off to Amsterdam for IDFA, Paul chatted to us about promoting Where You’re Meant To Be and the journey he’s been on in the last 9 months since the film premiered at the Barrowlands as part of Glasgow Film Festival.

Promoting is a skill that Paul could take for granted, having been a music promoter for over 20 years. From 2000 to 2008 he and Neil Mowat created the Triptych Festival in partnership with Tennent’s Lager. From his time promoting, producing and programming Triptych Paul learned how to create events and tells stories that provided a vehicle for a diverse range of musicians from around the world. Little did he know that these skills would come in handy when it came to promoting his debut feature.

If you’ve got a great film like Where You’re Meant To Be, why do you have to find innovative ways of getting it out there?

I know it’s frustrating because the film should be enough in its own right but so many people are looking to grab the attention of new audiences that you need to cultivate new ways of creating awareness. We live in a time where if you make something as an independent filmmaker you’ve got to able to get it out there yourself. And if you don’t have that skill you need someone who does or at least be willing to learn. I had to learn quickly on the job and part of that is fucking up and moving on from that. I think these days independent filmmakers need a broader skill set. You can’t just be an auteur filmmaker who lives in their own head. You need to be able to have a willingness to exploit whatever it is within your film to help get it in front of people. 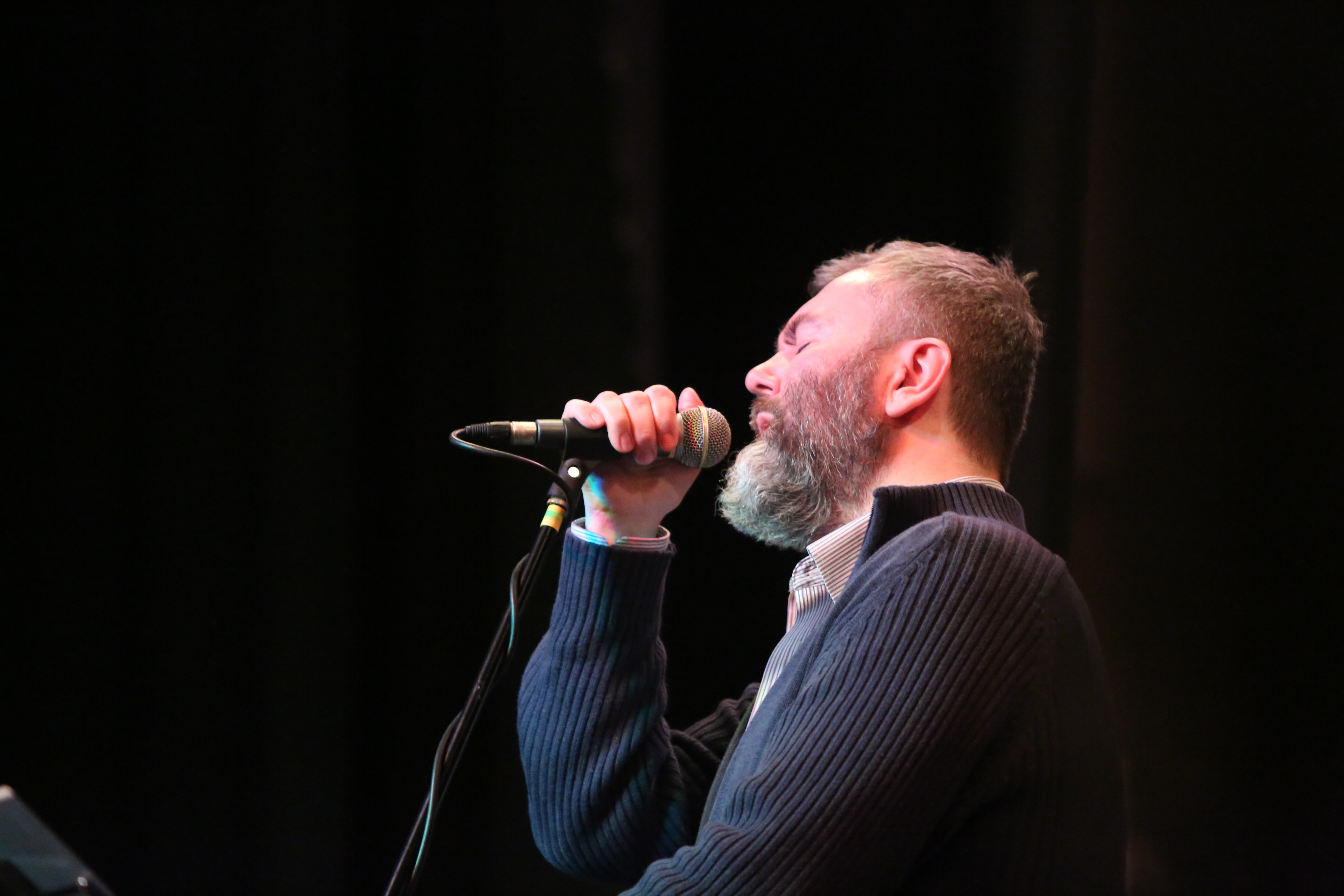 People can sniff out when your activity doesn’t match the kind of thing you’re trying to sell.

In what way was your distribution and marketing plan specific to Where You’re Meant To Be?

Authenticity was really important. People can sniff out when your activity doesn’t match the kind of thing you’re trying to sell. This film was very much about communities and how they manage the ebb and flow of culture and the way we promoted the film reflected that. Preview screenings happening in places that didn’t have cinemas and in rooms that we’d used in making the film made sense because of the film we were promoting. It felt natural to do that. It could be quite shambolic and by the seat of our pants at times but that was OK as it was more about sharing the film with these communities first and foremost.

The team working on promoting the film were really important to our success. Ellen our PMD was instrumental in constructing and taking charge of the communication plan and managing the design of all the materials for the film. Our press officers in Scotland and London were also really important members of the team, and collaboration with the Scottish Documentary Institute who exec’d the film was helpful in terms of things like being introduced to Picturehouse and the start of that whole relationship. Picturehouse cinemas, who got involved early on, appreciated the opportunity to create event activity with both the film and live performances from Aidan. The other aspect of the film they felt was important and mirrored a cinema experience was that of bringing communities together which is at the very heart of a cinema experience also.

How important was it to have Aidan’s involvement in promoting the film?

Most people like films that are made about their heroes or subjects they feel an affinity with because it’s reaffirms their appreciation of them. Aidan’s keenness to always be involved has been a massive part of getting it out there. A lot of people came to the preview screenings because they knew they’d get a performance from Aidan so in a way Aidan acted a bit like a Trojan horse for the film getting it in front of people initially and allowing the film to find its own audience in turn.

What was the biggest risk you took in promoting the film?

Well there’s a thin line between belief and being foolhardy. Taking the film and having its premiere at the Barrowlands, a venue that had never been used for a film premiere before was risky. For a film on this scale getting an audience of about 400 people would have been good but to make the room busy we needed to get almostdouble that, and we did. We managed to get to a 750 attendance. It was risky but it was the best place to start the film’s life because the venue was such a big part of the film and is also a cornerstone of Scottish culture. And it paid off because the Barrowlands and the preview tour generated interest in the film prior to its UK release. Edinburgh International Festival and the UK release came after that, and that was really down to the fact that we’d shown there was both an appetite for the film and the live performance element combined. 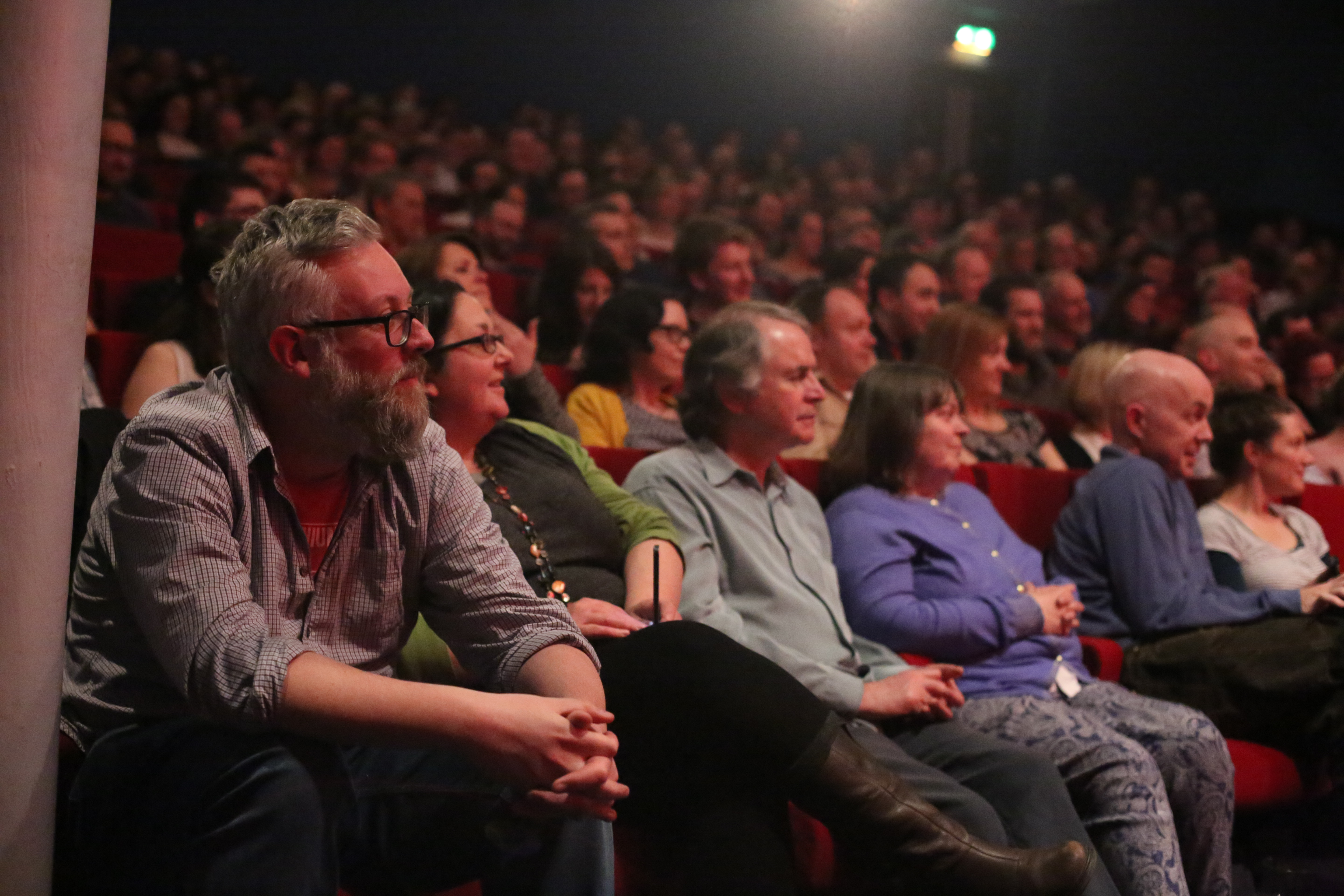 You create this cottage industry around this thing you’ve made in a time when we’re so disconnected. So anything to connect you directly with your audience can only be a good thing.

How much time do you personally invest in promoting the film and where do you draw the line?

Aidan laughs at me and says I should have a separate email from my personal one but I don’t. I get all the DVD orders and process them myself. So I flew back from winning an award at Chicago International film festival and sent out every DVD myself. I think it’s really important to deal with your audience directly. You create this cottage industry around this thing you’ve made in a time when we’re so disconnected. So anything to connect you directly with your audience can only be a good thing. Like having Aidan perform in your living room after you’ve hosted your own screening, which was a prize draw we ran to coincide with presales of the DVD.

Will Aidan keep doing the gigs at the screenings?

IDFA is probably among the last of the gigs so probably one of the last times he’ll do it. There’s going to be Celtic Connections, which is really just a gig with all the performers involved in the film. We can only ask so much of Aidan’s time. But at IDFA hopefully we’ll get it in front of some industry people who might want to take it. If one of those wants to do an event then it will be looked at on its own merits. Hard to say it will be the last but it will definitely be one of the last.

What was the hardest part of the promotion?

The Barrowlands was really stressful so it was hard to enjoy and it was the culmination of the film having its first proper big audience and being immersed in the production of the show. I’d underestimated the pressure of presenting the premiere and promoting the thing I’d created.

What were the really special moments in presenting the film?

The most enjoyable part of making films is when the characters and the people making the film are completely involved in the process. You’re making this thing together. It starts with one or two people but ultimately it’s a team of people who make it that thing that it needs to be in order to be successful. With Where You’re Meant To Be, people went way above the call of duty, and they did that just to be a part of something like that, that articulates a moment in Scotland.

Iain MacDonald, the crofter on Skye who features in one of the final scenes called me on Saturday night after he’d just watched the DVD with his friends and family. It was amazing listening to him talk about it and how much it meant to them to have a memory of his wife. That’s such a great feeling. You’ve touched someone’s life. 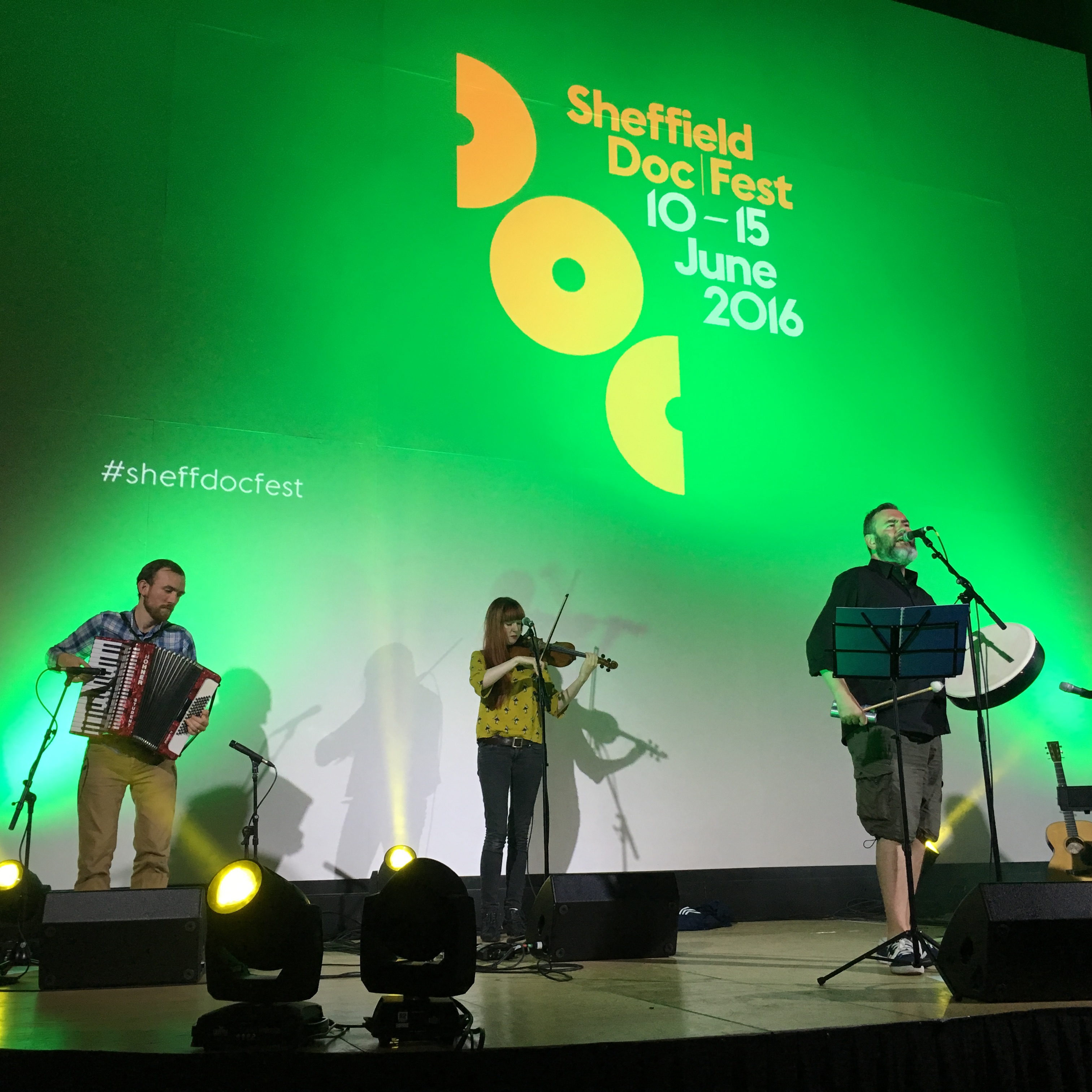 Aidan Moffat and band at the Sheffield Doc Fest screening

What advice can give you give to filmmakers promoting their own work?

If you don’t know someone or something there’s no shame in that. Just ask. There’s no end to the amount of info that’s out there in terms of success and failure. You will struggle at points and other points you’ll find things that work. Be positive. When you make something that’s so personal to you, it can hurt when you get rejected. Getting it out into the world can be horrible and cringeworthy when you’re trying to sell the thing you’ve made. I’ve had plenty of rejections. It’s not been a golden path of positivity. But if you have clear ideas and your own direction then you can keep going and keep your own plan bubbling away.