I rented a room in the centre of town as public transport tends to be reduced to “chapas” – little mini buses which are always so full that you have young men’s bums sticking out of the windows and they have this tendency to break down, making any journey a challenge to time and patience…

First morning, after a night of heavy rain, I woke up to the croaking of frogs and a city landscape transformed into lakes of murky waters and floating rubbish. I’d never thought of packing my Wellington boots. My project is about the way the city of Maputo has dramatically expanded over the last few years, creating a large suburb of what appears to be endless slums. For the first few days it was extremely difficult to access the families I was going to work with, as the lanes were transformed into a slalom of mud. As days passed by I grew more anxious, having only 3 weeks to research and film this project. But the sun returned and I was able to get on with the next challenge, getting to know my families, and start filming.

At the beginning of  every shoot I always returned to the same debate in my head: do I start filming immediately, or do I allow myself to settle in? In the context of Africa often you don’t even get a choice as people don’t allow you to film… full stop. There is a well funded suspicion that cameras will take your soul away, only to financially benefit the filmmaker. How can I explain to them that I make a living wanting to give voice to forgotten people… I might be genuine but they don’t really care about me being a messenger. They look at my immaculate white T-Shirt probably produced by child labour in China and my chauffeured 4 wheel drive and hiss “What’s in it for me?” And I think of Sergei Dvortsevoy, when he talked about “feeling bad at turning people’s lives into art and then abandoning them to their own devices” which led him to his decision to give up documentary. He  could no longer stand that strained relationship with his characters. I tried as much as possible to delay payments by bringing presents, mainly in the form of rice, flour, oil and then at the end some money for the ones who need to buy medication and a new capolena (material used as skirt) in order to offer those women something colourful and for them. But every visit was a reminder and a re-negotiation of that relationship.

It is harder to do it with characters I feel emotionally involved. The camera is not only a way of measuring the distance of our two worlds but also an obstruction to a helping hand. 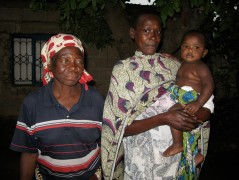 One of my characters is this lovely old grandma who during daytime looks after her two ten months old grand-children and goes fishing at night. She normally walks 8km to get to the sea, in the dark, barefoot, carrying her nets on her head. The night I went with her, even for the sake of the film I could not let her walk when I knew I had a car at my disposal… so I decided not to cheat it either in the film and pretend she walked there… but how do I communicate the distance she has to walk every night to go fishing? When we got to the beach the tide was still high so we had to hang out for a couple of hours. Mama Teresa  then proceeded to walk in the sea with her fishing companion, up to their necks, despite the rain and the cold wind. They walked and pulled on their nets till 2am.

It was pitch dark and impossible to film so I sat in the car with my assistant, a local young man, who just finished his MA in sociology but could not find any work in his field at university because he was not member of Frelimo, the national party. He went on explaining his political frustration as a young citizen, waiting to see the generation of the Heroes of Liberation to die off to create a gap for change. But he now realised that they have already produced a class of technocrats who were protecting their interests, leaking that corruption into different parts of society… such as the police.

Just as we were mentioning them, a truck with ten officers, armed with old Russian rifles appeared. The chief, short and angry, possibly drunk, made us get out of the car and question our presence at 2am on Friday night by the seaside. Any other country, we may have had an apology for maybe interrupting what could have been a romantic interlude, here we were immediately treated with suspicion. Of course we had to provide papers for the car, and for ourselves. The search of the car brought the presence of the camera, which made us even more suspicious despite my permit for filming. His preoccupation was, it was pitch dark with nothing to film and the car did not belong to a TV company. We insisted that somewhere in the vast darkness we had a couple of fishing people and that not all cameras belong to TV. The rifles got closer to our chests for extra dose of intimidation,  as we were trying to convince them to fine us , if we had broken the law. Corrupt police hate fines, as it is paperwork leaving trails behind and they only get 10% of the fine, which amongst several of them is not worth the trouble… what they really want is to get people into panic and give them money to let go. Disappointed that our cold sweat did not turn into cash, they drove off, just as our couple was coming out of the sea.

What comes first: the film or the people?

I did not dare getting my camera out for a while but when they started climbing the rocks I just had to go. Mama Teresa was shivering in her wet clothes and her tired limbs made her extremely slow at climbing those slippery rocks. I stood there with my camera, thinking that I should go and help her, but if I did I did not have any ending to this sequence and maybe I did not have any scene as it was so dark. Help Sergei… what comes first the film or the people? You have your answer but I am still searching for mine… or in this case I chose the film. Mama Teresa greeted me with a happy laugh and a clap of her hands. She was so delighted that we were still there, not just because they were going to get a lift home, but because she felt we cared enough to stand in the dark and worry about them. Her life is like a little scratch on the video… it will be seen by people beyond her world. She laid her catch at my feet as proud as a cat with a dead bird and when I enquired how much it was worth she said 200 medicais, equivalent of 4 beers or 4 cups of coffee local price!