Rebellion in documentary is about bearing witness not retribution.

This summer I have been back in the editing room, trying to make sense of the material I have been shooting in the Bijagos archipelago off the West coast of Africa, over the last 4 years.

Having closely studied their history I have learnt that they are many different ways of rebelling and how we define acts of ‘rebellion’ is not always obvious. 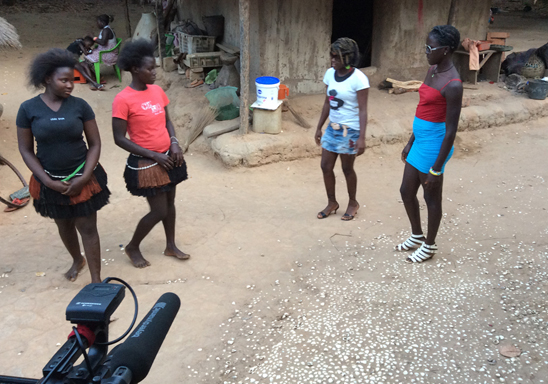 (Still from Noe Mendelle's forthcoming film shot in the Bijagos)

At the 1884-5 Berlin conference, when European countries carved out Africa, Portugal was given the territory of Guinea Bissau. They thought the best way to govern this rebellious Bijagos tribe and exploit their paradisiacal islands, would be to allow the Germans to set up a Palm oil factory and create work. A venture that proved to be a complete flop!

Both Portuguese and Germans were amazed that the Bijagos were more interested in continuing to cultivate their land and pursue their spiritual activities rather than earning money. The Bijagos have a sustainable way of life. They only produce and consume what they need.

Turning their backs to money was reported as a sign of laziness. All the reports said how “indolent” they were. I have filmed them working in their rice fields or climbing their palm trees and there is no sign of laziness!

Money is only useful if you cannot provide for your own needs.The Portuguese were most concerned as they wanted the Bijagos to pay taxes and therefore wanted them to access money. They tried everything from physical repression to passing a law to oblige them to wear European clothes, not out of puritanism but to create new needs. They would need to have money to buy the material. But for most of the twentieth century, the Bijagos strong, cohesive and collective identity helped them to resist. But, only slowly did I understand that this was a major act of rebellion.

Reading the amazing book “Debt” by David Graeber about similar stories in Madagascar at similar times made me understand that such defiance rarely lasts forever and all the current transformations happening to the Bijagos are linked to the creation of new “needs” and having a market to supply it.

I thought that by filming the Bijagos and holding it up as a mirror to them I would stir anger and vengeance and stop them moving too fast into modernity. Wishful thinking! I then remembered a 2007 Guardian article written by Mark Cousins asking “would movies be without revenge?”, in it he examines how the notion of vengeance is a cinematic staple in every continent but one: Africa! He quotes another of my heroes, Senegalese director Ousmane Sembene : "You don't tell a story for revenge, but rather to understand your place in the world."

Here’s another lesson from African cinema, a culture where bearing witness is more important than retribution.  That is what a true Rebellion documentary is about.