Mining Poems or Odes, produced as part of last year's Bridging the Gap: Resilience programme, is currently a Top Staff Pick on Vimeo and it's great to see it's getting a warm reaction in the comments feed!

When Lisa Clarkson saw "Mining Poems or Odes" for the first time, it inspired her to write this response. Lisa is a graduate from Screen Academy Scotland. She says she wants to be a writer when she grows up, or a Foley Artist. Lisa lives and works in Edinburgh. 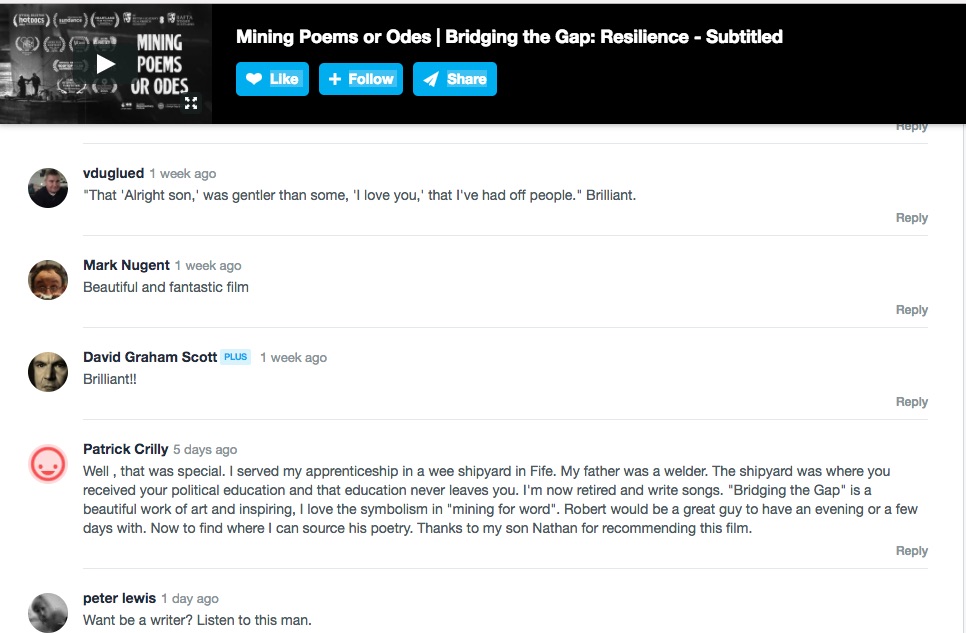 How does it work?

How can it be that an arrangement of words and pictures can start what feels like a fire inside your belly? I saw a short film directed by Callum Rice one Friday morning and it did this - it sang to me. Despite the star of the film being a roll-up smoking auld gadge, the beauty of Mining Poems or Odes is undeniably true and somehow pure. A primarily talking head style video of Robert, a former shipyard welder, intercut with scenes of shipyard life and Glasgow tenements shouldn't be this exciting. But the way in which it sings is just gorgeous. A lyrical love story to Glasgow and its lost industry. Robert’s deep sense of pride as both welder and poet is infectious. The way in which he entwines the two crafts is beautiful; and the way in which he is presented is too.

watching this film is dangerous. It says go forth Workers… women…  unschooled poets! And WRITE.

As expected of a film about poetry, the musicality of the piece was stunning. Smoky velvety strings haunt Robert’s soft words, rising and falling with the speaker, at odds with the craggy face. Further more it is visually arresting, with Rice choosing soft and dreamy images of ultra masculine settings, thus showing the themes of which Robert speaks - of the whole man. This whole man - a man of words and body. Men of great physical strength, huge men throwing weights ‘about for fun’ - the same men who show real emotion and sincerity in an ‘alright son?’. Men who speak and think with an intimidating strength.

Robert’s ‘trade in blood and human bone’ sticks to the memory just as vividly as Edwin Morgan’s shilpit dogs or roses of mould.  Images too cling to memory: Robert’s crumpled face and the Glasgow red-stone gargoyles - the battered Wordsworth copy of The Ragged Trousered Philanthropist which sits beside Robert’s ashtray and notebooks, all of life’s essentials - the welder’s helmet and the sparks exploding in front of it - Callum Rice’s visual poetry is as equally delicate and brash as Robert’s spoken words are.

Of all Robert’s words there is one which clings to mind the most - MINING - ‘what a word’ he says - indeed. As a junior writer (in a senior body) ‘mining’ wraps up the slog, the mental gymnastics of working to find a gem - the perfect word, to place within words, within sentences and structures, within characters, inside worlds. Mining - groping about blindly; in the dark, frightening, probably ugly and yet completely intangible depths of your own mind for the right thing to say. So easy to give up and listen to multitude of other voices and get on with real life, to shut up. The hardest work is to keep mining.

But watching this film is dangerous. It says go forth Workers… women…  unschooled poets! And WRITE. Do not go gentle into that good night… Keep mining for the right word because it is in there, yet undiscovered. Rage against the darkness and keep mining… Write and speak and say the words, show them off. Beautiful.