Rebecca Day recently attended the Getting Real conference in Los Angeles, run by the folks at the International Documentary Association. It’s a three-day event filled with international filmmakers, inspiring keynotes, presentations, workshops, and vital conversations around the most urgent issues facing the documentary community today.

As in past years, the main focus was the ever-increasing question of sustainability within the industry. This year transparency and creativity were added to the conversation, which made it the perfect environment to launch a much-needed discussion around the more vulnerable aspects of making documentaries. Rebecca went over there to host a panel discussion titled ‘Therapeutic Interventions in Documentaries’. Here she tells us a little more about how her work as a producer is merging with her new focus on mental health in the documentary sphere. 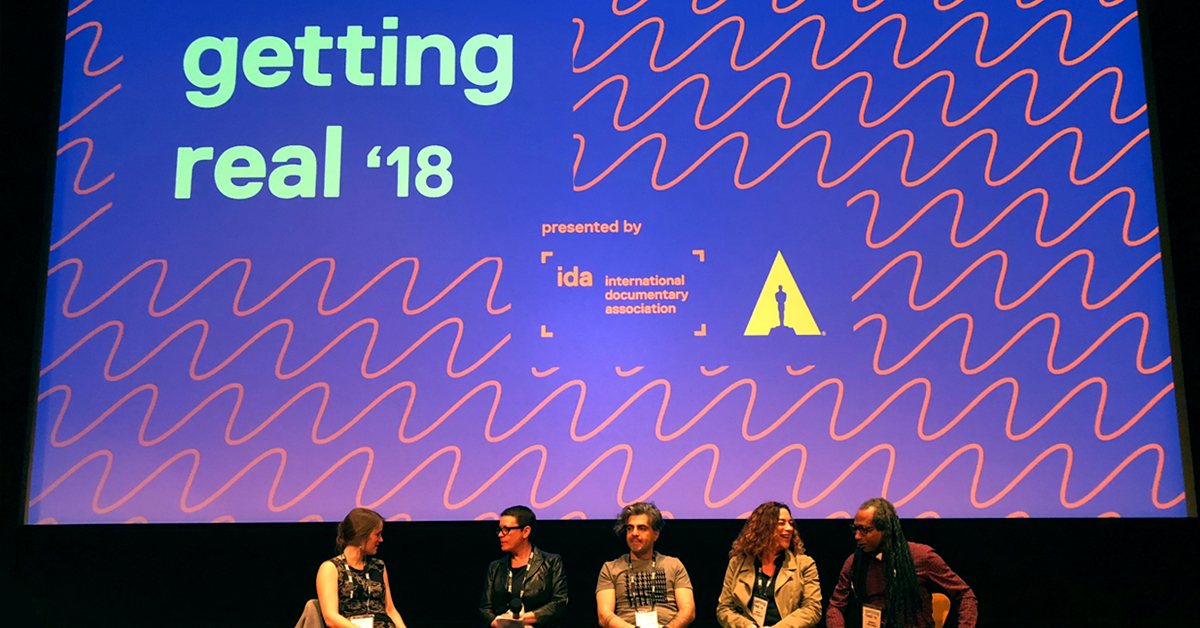 When IDA first asked me to host a panel at Getting Real, coming up with the title seemed to be the hardest part. Remarkably, this could have been the first time that a focus on filmmakers’ mental health and well-being was shared publicly at a festival - there is no precedent that we could see. How exactly were we going to do it, and what were we trying to achieve? We settled on Therapeutic Interventions for Documentary, which created lots of space for curiosity and questions! For me, it was a conversation starter and Getting Real was the ideal space for this. As a documentary producer, I’ve been asking questions for many years now about the effect that making films has on our mental health. A couple of years ago, I decided to deepen my thinking on the subject by embarking on psychotherapy and counselling training. This period of theoretical research and intense personal reflection gave me the confidence to begin addressing the pain and vulnerabilities that many of us are experiencing when making feature documentaries. As a result I have set up Film In Mind to offer therapeutic consultancy to the filmmaking community.

I knew deep down that I couldn’t earn a living as a freelance producer while staying safe and strong mentally.

The last few years have taken me on quite a journey. I’d been working as a producer at the Scottish Documentary Institute when I made the sudden decision to move to the Lake District to live with my new partner. I went freelance but armed with my knowledge of the demands of producing feature documentaries and seeing how other people struggle, I knew deep down that I couldn’t earn a living as a freelance producer while staying safe and strong mentally. So, I made the decision to re-train as a psychotherapist, partly in pursuit of financial stability, and partly to develop more of the human connections that I so love. It remains to be seen if these two parallel careers can sustain each other; but, what I’ve been struck by since qualifying is how closely aligned the roles of producer and therapist sometimes are. This inevitably led me to question what role my therapy training could lend to the film industry in terms of looking more closely at how we work and how we can better protect our emotional vulnerabilities.

[O]ur motivation to give ourselves wholeheartedly to a deeper understanding of others and the world we live in is a central drive to our work.

It seemed to me that there was a distinct duality between the creative documentary making world and the therapy world. In both, our motivation to give ourselves wholeheartedly to a deeper understanding of others and the world we live in is a central drive to our work. We have a desire to work with people in a certain way; we’re drawn to certain types of stories and more often than not, we come from those emotional spaces ourselves. Our natural curiosity and compassion has been shaped by our personal experiences. Yet, there are two really crucial differences to the process that divide us – while the relationship between the therapist and the client remains private and confidential, the shared experience between the filmmaker and the protagonist is ultimately turned over to the public. And, perhaps even more importantly, therapists undergo years of training that encourages deep personal self-reflection, endless debate on client safety, boundaries and ethical ways of working. Meanwhile, the majority of film training focuses on creative elements, leaving us relatively in the dark when it comes to holding someone else’s pain and suffering, or dealing with our own, especially in cases where we are exposed to trauma.

With a new way of looking at how I worked, I was suddenly aware of how multi-faceted this area of discussion was. During our hour-and-a-half long panel at Getting Real, we barely touched the surface, but we did highlight some sensitive areas that resonated for the audience and I during the rest of the conference. 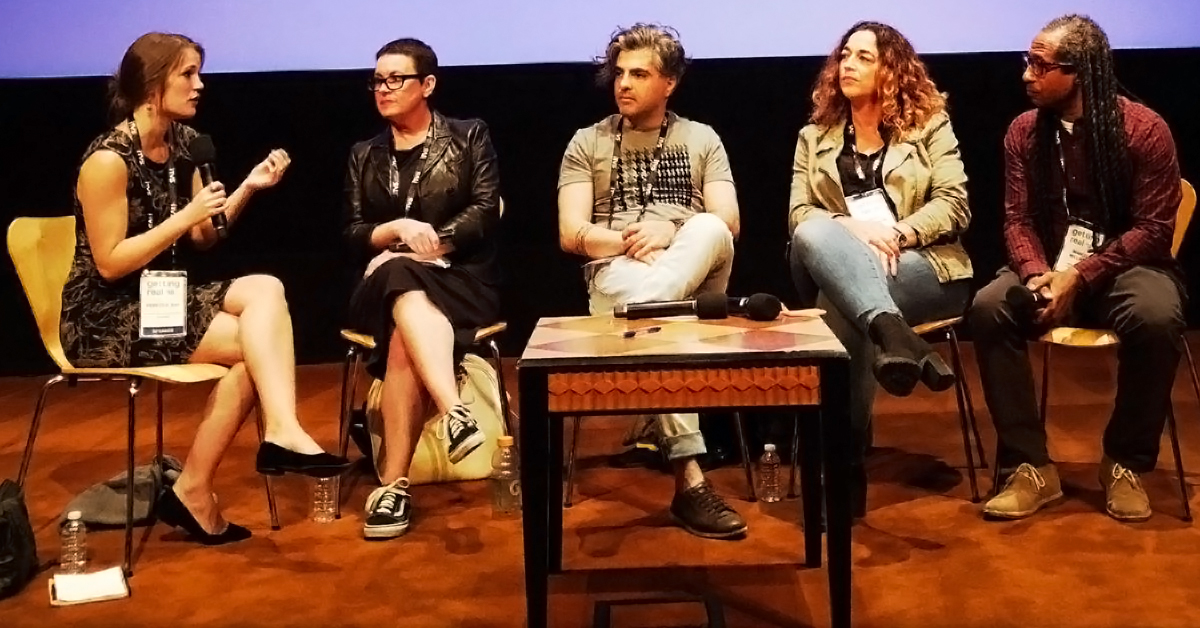 Producer Heidi Reinberg, producer/director Kristi Jacobson, director Feras Fayyad and director Marco Williamson joined me on the panel. All of these brilliant filmmakers are winning awards for their work and being funded by all the right people – Sundance, Tribeca, HBO, POV, to name but a few. Yet, in the course of creating their profoundly moving work, everyone had experienced doubts and hardship at some level. When we were discussing the direction of the panel, the feeling that came up again and again was one of responsibility. Whether you’re a director, a producer, an editor, a DOP or an impact producer, we all feel such immense responsibility in the role that we play, while trying to create the best film possible. We feel responsible to the people we film with to protect them and represent them in an honest and dignified way. We feel responsible to the wider community that we will be sharing the film with to ensure that it can make a change; it can have impact. And we feel responsible to our crew; to pay them, to make it a success, to make it a bearable process. Finding a balance between all of those different responsibilities often means that one person is pushed to the sidelines: you, the individual. And frustratingly, you can often have two or three people on the same team all feeling the same and all feeling alone in that.

When sustainability is at the forefront of everyone’s minds, it’s hard to put self-care up there as a priority

Our panel members could all speak to that, one way or another, and while we didn’t have the answers to immediately fix this, we could feel a relief in being able to voice it aloud, to a room full of understanding filmmakers who had all experienced a version of this. The release was palpable; to have the emotions normalised is an essential step in enabling people to not feel ashamed about factoring self-care into their working practice. When sustainability is at the forefront of everyone’s minds, it’s hard to put self-care up there as a priority, but how can we realistically make ends meet if we are struggling under the emotional pressure of delivering a film that bears that much responsibility? We must put a value on the importance of recognising this, one that exceeds our monetary needs.

That drive to tell the urgent, vitally important stories of our time is worth protecting

Over the course of the three days at Getting Real, I had many conversations with people that highlighted some burning issues. Yes, people are primarily worried about career sustainability: yet they are also experiencing second hand trauma; complex transference of emotion when the issues within the film come from personal experiences; fear and anxiety over the unknown nature of filmmaking; guilt over feeling like they might not finish the film; fear of exploiting the people they film with — the list is long. Yet, at the heart of all of this is an intense passion for what they do and a belief that the film must be finished and must be seen. That drive to tell the urgent, vitally important stories of our time is worth protecting, yet what practical solutions can we offer? It would be a tall order to ask every filmmaker to also train as a therapist so that they can value the importance of personal reflection, and discuss the complexities of offering empathy while trying to make an impactful film. Nor can they afford to enter into long periods of therapy themselves. Yet it seems that a greater awareness of the risks we take, as filmmakers needs to be acknowledged. The very least we can do is talk about it.

Read more about Film in Mind on the website: www.filminmind.co.uk