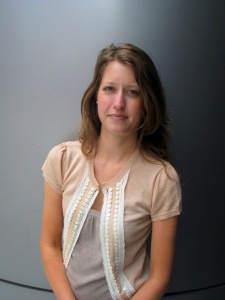 This year we added a short course lead by Sandra Whipham (London Fields Pictures) to our selection of offerings to Scottish producers and filmmakers. 2x 2 days (April & September) on what to consider in order to get your films ready for the international market and the role of a producer in shaping the strategies for a film.

Have you ever thought about how many roles we take on as producers? We need to be creative and nurturing, counsellors and confidantes, we need to know some technical stuff and not shy away from accounting, marketing and legal contracts. Maybe "Jongleur" would be a better description. And of course we need to accept sometimes that we're "the boss" technically, and literally, and not worry about being unpopular. In fact if you like being popular, perhaps it's not the right career choice.

We selected 6 projects and 6 observers in order to brainstorm the projects' budgets, financing and distribution strategies. It  soon became very clear to everyone that the landscape is very tough. Not every project made it to the second weekend, as the willpower needed to continue developing a project on this scale is significant. This is not always a bad thing. I'd rather see people make shorter films or TV hours, than spending a few years never getting a film off the ground. 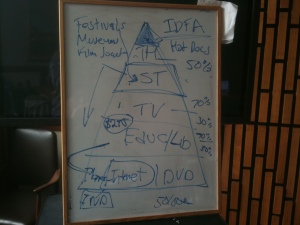 The desire to make films for the international market often stems from the idea of making a "theatrical documentary" - and the difficulty of achieving financing from your home country alone. If getting money and making the film is difficult, distribution is another blackbelt level! We explored different distribution avenues in the first weekend with Debra Zimmerman of Women Make Movies. She explained the traditional "distribution pyramid," in which we can go down the way, but not up – the top being your carefully orchestrated world premiere, the bottom being widely distributed dvds etc. These "windows" are slowly but surely collapsing around us, and increasingly we're trying to exploit our films simultaneously in cinema, on tv and online.

We had a session on the UK tax credit by Moses Nyachae from Tenon. It was reassuring to hear that the DCMS really does want us to qualify our films and it was the first time I had an accessible explanation of tax credit, which ironed out some questions I had about how to calculate certain value, specifically in terms of documentary. It has to be intended for theatrical release of course, but it does not have to have a guaranteed release. It is a percentage cashback of your (eligible) actual core production spend. It is automatic once you've certified your film as British (or under European Co-production Convention). So get on to it, if you think you can qualify (more info here and here).

Geoffrey Smith talked about narrative strategies and the "controlling idea," a concept borrowed from fiction film. What the film is really about should be in every scene of your film; working out what it is really about will help you when struggling to know what to film, and whether to put the camera on. He talked about multiple camera shoots and how we can make it easier on ourselves by intercutting real emotions and reactions, shooting a film in a relatively short space of time, as opposed to tracking someone for years, at a high cost to the subject's - and director's - patience. "I'm a populist, I want as many people as possible to see my films," he said, and: "People go to the cinema because they are hard wired for story telling." We're naturally curious how other people decide what to do when they encounter a fork in the road. It's as simple and difficult as that.

All in all what we aim to foster with Interdoc and all our workshops is a sense of sharing and pooling of knowledge and resources. Producing, directing, it all can be a lonely place. Sharing quality time by exchanging info and stories makes us stronger and more resilient to the vagaries of our profession.