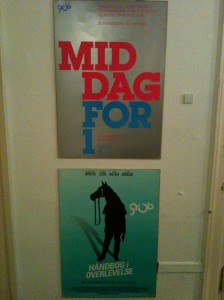 The perfect (documentary) antidote to Sheffield Doc/Fest is definitely CPH:DOX held in Copenhagen from the 4th to the 14th of November. The festival moves at a far more laid-back pace and whilst having an industry focus with a forum, market and masterclass’ a plenty, feels so much more about celebrating creative storytelling rather than rushing around trying to catch the latest commissioner to pitch your idea to. I have a feeling that I could pitch to someone there at ‘leisure’ during one of the many food and drink parties that take place throughout the city. Being a filmmaker, of course both festival formats have to exist in order to survive and get your work out there but sometimes we get lost in trying to fund our films and forget to watch!

We were in Copenhagen not just to sample the fine beer and documentary but we had been asked to programme a few films from Scotland and nearby for the DOX:Market that were not likely to have exposure in Denmark. I took our latest Bridging the Gap films, Edinburgh College of Art films and three longer films: The Edge of Dreaming by Amy Hardie, Colony by Carter Gunn & Ross McDonell, and 1000 Pictures by Jennifer Stoddart which seemed to go down very well. We also had one of our latest Bridging the Gap films Lost Everyday by Michelle Coomber in the Short:Dox competition.

Watching is exactly what I wanted to do for a good chunk of my stay in Copenhagen, not before experiencing some incredibly strong pitches at the DOX:Forum, it’s always reassuring to see other pitching forums that are on the same scale to our Edinburgh Pitch held during the Edinburgh International Film Festival in June – seems we aren’t doing too badly in our aim to be a small, friendly, relaxed warm environment in order for people to pitch their ideas to commissioning editors without the hustle and bustle of a large market place going on around you. We think this is and excellent place for pitchers and funders to be at ease in and around the forum. Highlights included Margreth Olin’s latest offering Nowhere Home and Hassel 12 by Mans Mansson, definitely ones to watch out for in the coming couple of years.

My colleagues have bashed on about coming to Denmark to experience the passion for documentary filmmaking there. I sampled some of Denmark’s finest in the shape of: and The Good Life by Eva Mulvad and produced by Scottish Doc Institute ‘regular’ Sigrid Dyekjær of Danish Documentary. A modern day Grey Gardens by Maysles brothers is totally spot on. The unflinching, claustrophobic pricklyness of watching once rich mother and daughter and their daily heated exchanges in their tiny flat in Portugal had you on your toes from start to finish – fantastic! I also watched Jorgen Leth’s Erotic Man, I love his work and don’t think this is an exception – like his regular collaborator Lars Von Trier he is playing with the audience in this provocative piece which made me love him, hate him and feel sorry for him many times throughout the 90 minutes!

I finally caught much talked about film The Arbor by Clio Barnard (UK/Japan) I had a lot of mixed feelings about it due to it’s typically socially realist themes which Stig Andersen from the Norwegian Film Institute pointed out: “You Brits know how to celebrate poverty extremely well!” It isn’t entirely bleak though with many moments of hope and positivity peppered throughout, this is truly pushing the boundaries of the between documentary and fiction, what a brave and interesting piece. A film that works on so many different levels.