Women in Bijago culture hold a very important role and are feared by men! They definitely talk louder than men... and very direct. But their role in the villages is still locked to farming, fishing and looking after children.

However, they have a phase in their life around their 20s when they abandon children, husband and family to move into a dedicated female house in order to allow their body to be taken over by male souls in need of purification. Then they can do anything they like except having sex (with men). They go wild dancing and doing mischief. Completely possessed, they have their own language, only understood by other women who went through that phase – and by the sacred drum player. We are talking to one tomorrow. 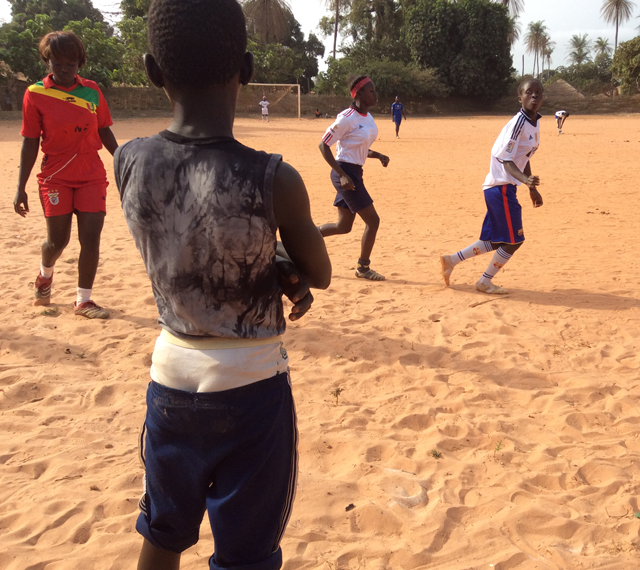 Anyway, today we remain in town to attend a football game with a difference: The first female football team in Bijago and Guinea-Bissau played to half a dozen admirers.

We talked to them afterwards about the support – or rather lack of support – by their families for this imported 'male' game. Some of them have to sneak their training clothes out of the house and lie to their parents about their passion. It clashes badly with their parents' tradition. But they don t care, their role models is a French female footballer: Louise Nécib.

The warm-up went on for over 30 minutes. It was great, it looked and sounded just like their traditional dances. They can neither afford a team T-shirt nor shoes but they all had great hairstyles... obviously Beckham's influence!

Those girls had so much passion. Talking to them afterwards was so enjoyable. Life in villages looks so grey and empty, I completely understand those girls risking their honour to run after a ball under hot sun.