This is our last trip to another island. Time is running out. I m not looking forward to another camping trip. Despite constant attention, the spots on my legs are looking like craters and are all getting infected. My toe is still home to a worm farm and starting to look beyond repair. God knows what my Edinburgh doctor is going to make of it... I'm struggling with my right foot and Luis with his left knee. What a pair of wobbling directors!

On our arrival I changed my mind. It was such a pretty beach were we landed at, and such a lovely village! Too bad that villages are always a few kilometres into the forest. I would have loved to do a dive. Ancumbo was different from other villages we had seen so far. All the houses had big terracotta pots to keep the rice. They gave a majestic look to the place. 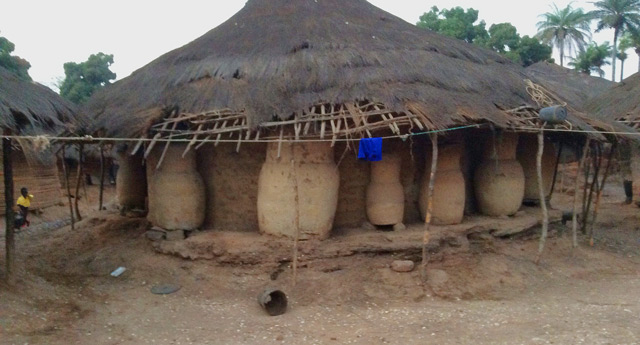 Village with pots for grain

Our arrival always creates a buzz, but here you could see that not many people had seen a white person before, let alone two women and a man! Some kids run away crying, but adults and braver children would come and stroke our skin and hair in disbelief. I can't wait to bring a ginger Scot along!

Our host was another lovely man who looks after cultural activities of the village. We met him in Bubaque three weeks ago at the carnival when he came with a group of dancers to perform a sacred dance called 'vaca brute', the story of a pastor trying to control his cows. It is a great honour for young men to perform that dance, and once they finished their initiation, they can no longer perform.

The group did so well in Bubaque, they won the prize to go and represent the Bijagó in the main carnival in Bissau. We interviewed two of the lads who had never been to the capital. They talked about all the things that surprised them, dars and planes they have never seen. But when asked what they would have loved to buy if they could have afforded it, their answer was: rice and a large knife.

Tradition requires that for every action to be taken, one must ask the chief of the village to consult the Iran spirit. Our lovely fixer in Ancumbo asked us if we could give him and his brother a lift to Bubaque because his brother was unwell and he wanted to take him to the doctor. Of course we agreed, but he had to ask permission from the chief. A chicken was sacrificed and on the basis of where the killed chicken runs, permission was denied. We don't know what the brother was suffering from but we could see on Ignacio's face that it was quite painful for him to accept the decision. Of course, he could not take the risk of going against Iran and endanger his brother and family.

We left behind the rice we had left over. 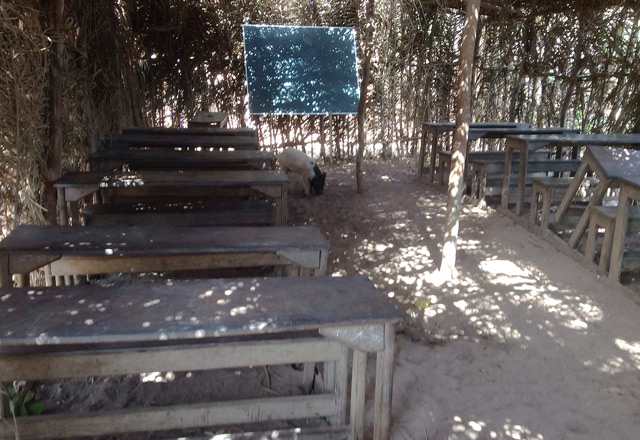 A cool school in the bush