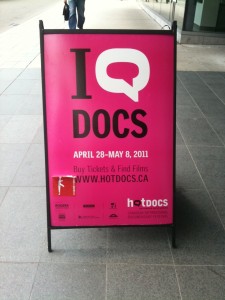 If we had an award for "best audience" it would go to the city of Toronto. Every single screening at Hot Docs was packed with a crowd, which gave themselves over to the story on screen and lived through the roller coaster of emotions, laughter and tears. It was palpable.

There was a ritual: Every screening started with a humoristic advert to celebrate and thank all the volunteers who make the festival happen. Everyone applauded.

Every screening finished with a Q&A. Nothing unusual here, but what is unusual is the quality of the Q&A facilitators. They are the best I have ever come across. Armed with the full information about the director, the team, the film, they are able to engage an intelligent and emotive dialogue between the audience and the filmmaker. On The Bully Project I sat next to a 12-year-old girl who managed to overcome her tears and ask the filmmaker and an audience of 600 people if one should denounce bullies.

After the screening of James Marsh's new film Project Nim we were surprised by the presence of three of the main characters, who talked very candidly and emotionally about their relationship to Nim the chimp, twenty years on. Never mind they mildly shocked us with their 70s hippie-ish attitude, one of them, Nim's 'adoptive mother' breast-fed him alongside her own children...

After The Bengali Detective, the main character (the detective) received a standing ovation of loud applause for several minutes as recognition of the humor demonstrated in his life against all odds.

When I talked to Sean Farnel, director of Hot Docs, about Toronto's incredible audiences, he said that both audience and Q&A facilitators get plenty of practice all year round, with a rich exposure to a vibrant documentary culture in Toronto. A model to be upheld!

Every commissioning editor complains that there is no audience for one off documentary films proposed by indies, but again and again, hundreds of people were queuing in the cold and rain in order to catch another international documentary and the chance to share the viewing with the filmmaker.