Today we got back into our canoe in order to move to another island: Formosa. We were welcomed at the beach by some strong lads to carry our luggage, and then we set up our tents inside their local disco. A lovely round house, with beautiful paintings. Our host, Aliu, had build it in order to make sure the young in the village of Abu would have some form of modern entertainment at weekends and would not feel the need to leave the island.

Abu is the first village on this trip where I felt genuine love and use of the Bijagó tradition beyond the motions of rituals. There is a genuine attempt to combine it with modern life. Children are encouraged to go to school all year round. We saw them playing until bell time, and then a couple of older children took them through the drill of physical exercise while singing, and then they all scattered in their classes, eager to learn.

For the first time children were not excessively on the top of us and no begging went on. At last we could have conversations without feeling that a fare meter was clicking.

We met one of the old chiefs who is in charge of one of the Iran (spirits embodied in a sculpture) living in the village. Apparently this spirit is a mischievous one who is not accepted by the other Irans and lives alone in the hut built for him. He put a spell on two large stones and anyone trying to move them gets hit by disaster. 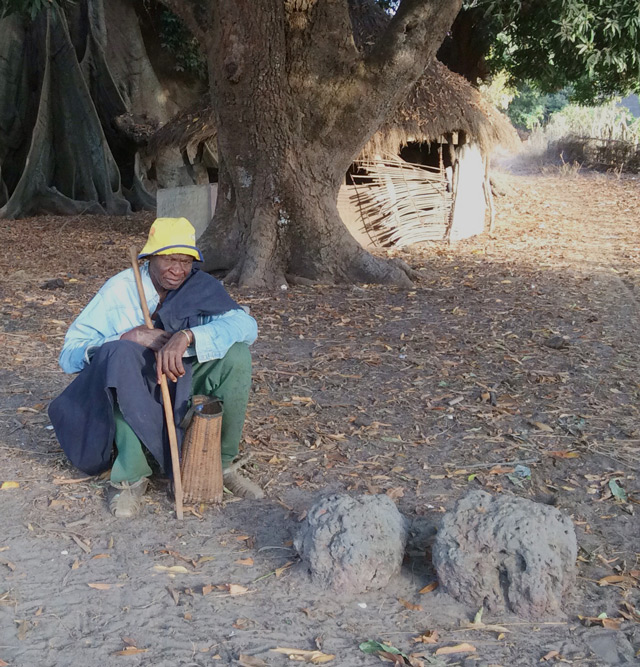 A chief, an Iran, and the two stones.

But it seems that this old man managed to tame his Iran and somehow developed a peaceful relationship. I think the chief was even proud of having a difficult Iran! His cheeky giggle when he spoke about him said it all. He may have many funny stories to tell but he won't share them. Not because we are foreigners but because our fixer is of a younger age. The entire Bijagó society is organised around the six different phases of a human life. The elders only reveal their knowledge bit by bit.

Sadly, some of that knowledge may soon be lost. In Abu the player of the sacred drum had died, quickly followed by his substitute. They took their secrets to the grave. For several years, official ceremonies have been suspended as no replacement has been found yet. For many of those professions linked to the sacred world, gaps now appear as the new generation can't complete their initiations.

To many of our questions, we get blank faces because of our fixer's age group. Unfortunately it is impossible to find a translator in the older class who speaks fluent Creole, let alone Portuguese. It is frustrating not to be able to speak Bijagó. So many words we use do not have the same meaning in Bijagó.

For example, the word for 'advice' really means gratification. It took us three weeks for that to finally click in our wee brains. Meanwhile our understanding of Creole has hugely improved, which means we can do the questions in Portuguese and get the answers in Creole without having to translate everything. Which saves us time, tape and batteries but, above all, allows the flow of the conversation.

We also filmed a group of women doing a traditional sacred dance based on the imitation of a bird, the Garca. They are amazingly graceful, dancing to the rhythm of a metal ring imitating the pecker of the bird.  The dance shows years of observation of nature while collecting shells on the beach where these birds live.

At some stage during the dance, younger women came to the dancers to touch and kiss their breasts. This is to show that in their current phase of initiation, the dancers are their 'mothers'. 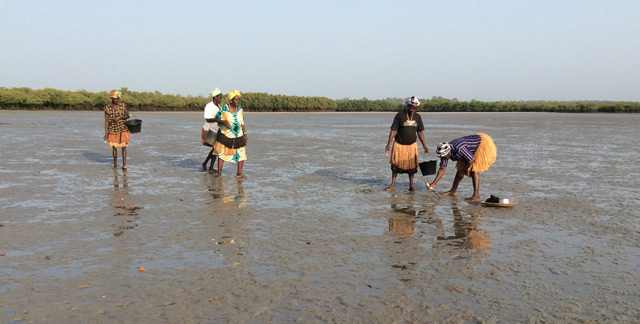 The following day we went with them to the beach. So exhorting, we had to walk for miles through the mud while the tide was low. Our tripods kept sinking in. Between the constant dust and now sea water and mud, those tripods are not going to last this trip.

Abu is a poor but well-organised village. You can see a real effort to preserve tradition while opening up to change. Some people would say that it is the presence of other religions, a strong Evangelist church but also a Muslim community. Nevertheless, the integrity of the elders made us feel that tradition was on solid ground. Their awareness of the equilibrium between youth and elders makes me think there is a search for solutions in the face of advancing modernity.

Later on we learned that our canoe steerers did not enjoy staying on this island. It seems that they were not made so welcome, on the basis of not having done their initiation... No sharing of Palm wine! We, on the other hand, run away from such offers!